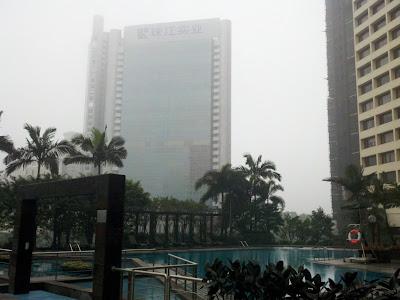 I walked into the Health Club at the Garden Hotel where we are staying in Guangzhou. I was wearing my Adidas warm-up pants that I had purchased a couple of years ago at Gabrielle Brothers, a discount clothes outlet in Sharonville, Ohio. They had a logo on the left leg from some high school team that I had never heard of… for whatever reason, they had been diverted to the store and I purchased them at a discount.

The logo happened to be a Red Dragon. I chuckled to myself as I thought of the irony. And, to top it all off 2012 is the year of the dragon. I figure that makes them my lucky pants.

As I turned the corner to face the front desk, I was greeted by 9 young men, dressed from head to toe in incredible white warm-up suits. I was thinking that I'd like to find one of these get-ups in an outlet store when suddenly the young man closest to me welcomed me to the fitness club and then asked me, "Are you an airline pilot?" "No." He then questioned, "Are you a military pilot?"

For a moment my mind went a bit haywire and I nearly responded that I was, in fact, a fighter pilot. I mean really, how cool would that be? I could parade around with the nine guys behind me, catering to my every need… bringing me water, handing me a towel, and adjusting the machines for me. They might even call the front desk and get me special treatment? At the very least… I would have bragging rights.

But then I realized something… and I found myself in an incredibly satisfying place. I was at this health club in the southern region of China, being exactly who I wanted to be. I laughed as I said, "no, I am here to adopt my daughter."

And I have to tell you, given the option of standing there either as a fighter pilot or the father of my daughter… it wasn't even a close contest. As cliché' as it sounds, my children have made me a better man than any other possible thing that could have come my way.

I stood in the gym of pilots, having found my way there as an adoptive father. It is amazing where our belief has taken us. And here's the funny… the nine guys still followed me around, handing me water, holding my towel, and adjusting the equipment.

We shared some stories, and some laughs as I clumsily dropped my mp3 player and then fell full body to the floor off of the elliptical (not my best moment). They were all polite and completely silent until I laughed... and then it was like a comedy show. I doubt if fighter pilots fall off the equipment.

I made my way out of the health club, feeling like a million bucks, and played a mean air guitar to the Highway to the Danger Zone from Top Gun as I rode the elevator alone to the 16th floor. Later I remembered the camera in the elevator. Ugh, I bet they are saving that video, along with my fall in the club. Thankfully there is no Youtube in China. Even so, not a bad day all things considered.

Besides… had I told them I was a fighter pilot, I may have ended up in a Chinese prison.

Tower, this is Ghost Rider requesting a flyby.
Posted by Chad P. Shepherd at 7:15 AM