Tales of a Third-Grade Something 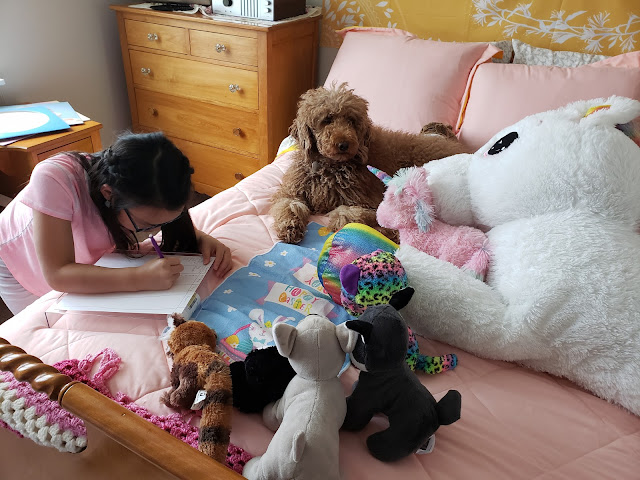 1983, you'd have found me in a room of blues, smashing hot-wheels together with an audience of Kermit, Oscar, Pooh, Eeyore, and my best buddy of all time, Tigger. I've lived the expanse of her lifetime five times over, but the tingle of imagination in the air still surrounds me.

Down deep I know that those stuffed animals are waiting to talk to mischievous ears that can still hear magic.

Dinah the Poodle joins the gathering of fantastic creatures and provides that felt companionship that only a dog has to give. Bridgette the Mutt was my backyard once-upon-a-time canine partner in adventure.

Together we transformed dirt piles into moonscapes and snowdrifts became the frozen expanse. She followed Rebel the German Shepherd and had a brother named banjo, but he died when the neighbor fed him antifreeze.

I didn't share that story to nine year old Sterling. It would have been a damper on the moment. The difficulties of life come our way on their own, it's best to return to the beauty.

It really isn't so far away for this 45 year old to get back to his nine year old days. I think really we should all travel back there more often. The mind has a way of reminding us that time isn't linear and memories aren't in the past. In just a moment... we are there again.

All it takes is a glance at a third grader among the tales and tails to remind us that this life really is something. 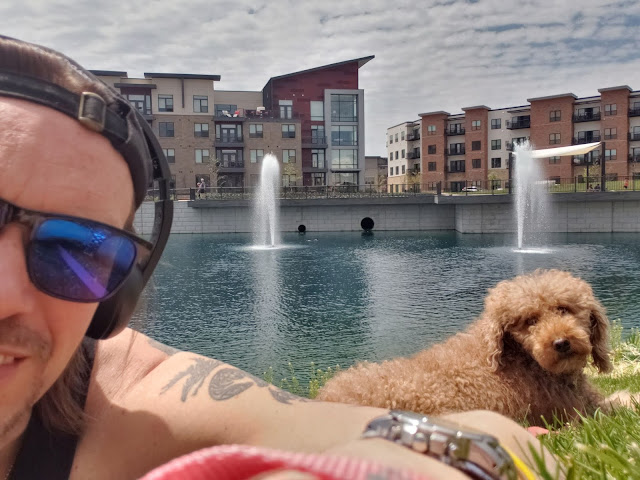 Sometimes it isn't about what you need to change. Oh sure, change is needed, but most of the time the timing just isn't up to us. I've been working lately on just living with awareness in the moment. A Jewish-carpenter-turned-Messiah once had something to say about this, something about why do you worry about whether you have a place to sleep, or if you'll be able to eat later, when even the birds of the air or the lilies of the field have a place and beauty unmatched? Do you really think that God will care less for you than He does for them?

The skeptic in me quickly thinks of drought and wildfire and flood... all things that kill the birds and lilies! And I think of all the suffering in the world. Even just this past week I was asked the question that I hate most. I thought I'd avoid this question since I'm not wearing my cleric on my shoulder these days. Nope, it found me again. "Why does God let bad things happen to good people?"

Since I'm not getting a paycheck from a church congregation, I answered honestly. "I hate that question. Why can't humanity move past that question? We've been asking it for millenniums. It's like a full grown man asking, "Are we there yet?" It was about then that I looked at the face of the person who had posed the question. Whoops. I had to laugh. "Sorry, I'm an ass sometimes."

"Ok, let me try that again. Here we go, first of all, I hate questions that begin with the word, 'Why'. Why is always the wrong question to ask. We need to ask better questions like, 'What is the reason that...?', or 'How is it that...?' When we start the question with 'Why,' it presupposes that something was done to us and we're the victim. But... in the case of this question, there is nothing farther from the truth."

Why is there evil in the world if it was created by a just and loving God? Again, wrong question.

Let's try again. What is the cause of evil in a world created by a just and loving God. Ah... there's a question that can be answered.

Simple. It's because the world is inhabited by humans.

We screw things up. Quite a bit. We cause disease, we fail to adequately prepare for disaster, we are selfish, we are fearful, and... we fail to hear those words of that Jewish Carpenter turned Messiah.

We fail to miss our daily heavens and instead put ourselves in a daily hell. We fear, we fret, we wring our hands, we assume the thoughts of others, we're selfish, we think everything is a slight to us personally, we think of ways to get even rather than set them right.

It's much better to take a walk. Lay down on the grass with your dog even though you didn't bring a blanket. Feel the sunlight. Watch the clouds. Are there things that need to change in my world today? Oh yeah, for sure. I want to sit at La Hacienda and be served chips & salsa and a giant margarita. I need to get back into the gym, I need to pay off my car, I need to be a kinder soul. All these things with time.

And I think part of that is learning to lay things down, feel my humanity, experience the goodness of this world, and slow down to be thankful. With all the things I can not change, there is deep enjoyment in the things that are freely given to my everyday. Just look for it. You'll see it too.
Posted by Chad P. Shepherd at 10:40 PM No comments: