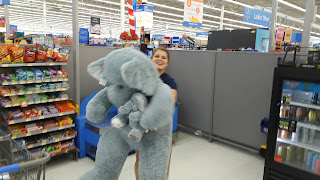 There's so much that I have no control over in this world. I suppose though, that if I were King of everything, the world would still have some problems! Even so, I'm learning that we each have the ability to choose our reactions.

Have you ever heard rumors about yourself that aren't true? If you're like me, there's enough true stuff and silly mistakes you've made, that there really is no need to make up anything more. I've heard crazy rumors about why our family left Guatemala.

The answer remains a simple one... we heard the Spirit of God in our hearts telling us to go. That was enough for us.

For others, they try to find hidden reasons. I've heard that we left because I must have "fathered a child in Guatemala," or recently I heard that we left and took money from our missions and church with us. Praise God that He has given me a sense of humor.

I can do nothing but laugh when I hear the ridiculous claims that come from the pit of Hell. You can be sure that when you faithfully follow the path of God, the enemy will come after you.

I can write with confidence that I am thankful for the family that I have. I deeply love them and they all rest under my roof. I can also confidently speak that we left Guatemala generously giving back to our mission, leaving extra money with the church we founded, and accepted substantial personal losses in exchange for our obedient service.

These claims against us are juvenile and baseless. Even so, I carry no ill will in my heart. May the Spirit of God provide to each of us what we need.

Some that I've told have responded that they'd seek recourse. No, that is not the path for our family. We do not seek retribution like a striking snake, we long to make impressions like an elephant. Let the foolish speak their nonsense. We are going to be about who and what we're called to be. This life is for those who live in the light.

It seems all of society is big right now on making accusations and claims. Let's you and I take a better road. I want to make impressions like an elephant.

Last Christmas Aleksandra wanted a giant teddy bear and her brother found her one that was about three and a half feet tall. She was thrilled! She has slept with her head resting on it all year long.

Several weeks ago while shopping in our local Walmart, her eyes lit up when we saw a bin of teddy bears, dogs, and elephants that towered over five feet tall. The price tag was a mere thirty dollars, less than the one hundred dollar price tags we'd seen last year for those that size.

Today she earned thirty dollars working for a friend and so we loaded into the car and made our way to Walmart... where there was one elephant remaining. She chose it over the bear and dog because it matched her room.

Today was a great day as she hugged that stuffed elephant through the aisles of Walmart and all the way to the self-check-out. We were stopped over and over by other shoppers who commented on her smiling face and our merry little band of elephant hunters.

Life is what we make it. Today could have been a day of fret and worry about what is being spoken of us some 2000 miles away in a land that we love... but, no. I don't live that life. I know the truth. We went when God called us and we returned when He called us back. We love the people there, the land, and we have no regrets.

Let the naysayers do their thing.

As for me and my house... we're making impressions like an elephant and God is good. We rest peacefully tonight. 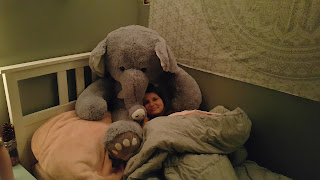