It's Not a Vacation Until Someone Poops in the Pool

Last week I went home to bury my grandmother. It was only 9 months earlier that we laid grandfather to the earth. There was some small degree of comfort in my heart knowing that she no longer has to wake up and look for him. Their marriage spanned seven decades. There surely were times when they considered tossing it all, or at least wondered why endure the struggle. And yet, they held on and surely that says something to us all today.

I think they would tell you that the passage of time is swift, and there is merit in the struggle. We are people of deep faith, and surely time no longer carries such weight, and struggle for them, but has given way to a deep reality understanding. I have great peace knowing that they are home.

Weeks before grandmother’s passing, our little family had agreed to a weekend getaway with another missionary family, the Hanson’s. Their family mirrors our own with a blending of biological and adopted children. I suppose it should be no surprise that this is quite common in the missionary community. It’s really not that much of a leap from making strangers family, to becoming family to strangers. I’ve heard it said that generous people are generous people no matter what the circumstance. I do like to think of us in that light.

And so after a week of intense and necessary time honoring grandma Ruth, Kellie insisted that we keep our date with the beach. It seemed needed now more than ever. Because of the cost of airfare, my family had stayed behind while I travelled. I think it was taxing on them to be apart from me and to have to say goodbye to Grandma from a distance. Everyone believes that his or life is hectic. I guess we are no different. Life can get busy and spill over into the night sometimes. Now mind you, I’m not complaining. In fact, I’d have it no other way. But it remains what it is. Life is rich.

We left San Cristóbal at 9:30 in the morning in order to miss the early rush… and then found ourselves delayed behind a beauty pageant parade. Trucks were decorated with paper and balloons, with each representing contestant either standing in the back or standing through a sun-roof. Music blared, people cheered, and would-be beauty queens waived that universal tight-fingered oscillating flip.

We made our way around the  processional and began the drive outside of the city, heading towards the coast near El Salvador. The drive was beautiful as we wound in the sunlight between the volcanoes. Two and a half hours later we arrived at the small dock on a river where we left our cars with a guy named Beto. We never actually saw Beto, but talked to a guy who new him who directed us to a traditionally dressed Guatemalan lady who directed us to park our cars underneath a pole and tarp shelter. We all assured each other that our cars would be there upon our return and we boarded the hand made boat. 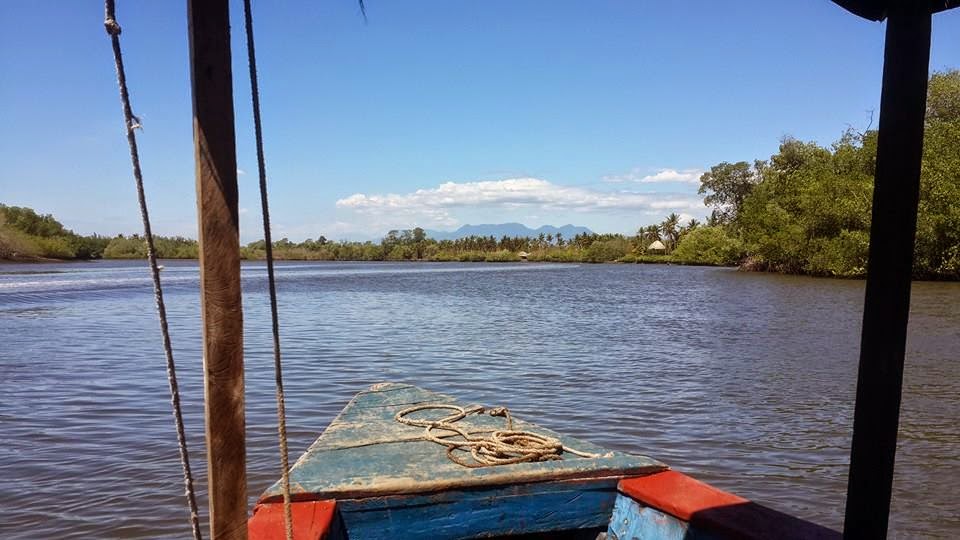 What we thought would be a quick shore to shore trip was in actuality a 30 minute or so ride down river. No one would voice it, but we were all thinking about movies where a bunch of morons get led out into the wilderness and knocked in the head. Admittedly, I ‘ve seen too many movies. It’s an addiction. Reality soon crowded back in as I realized the man directing the outboard engine was asking, “Here? Is this ok?” Since none of us had any idea what the place looked like, we said, yes.

“Yes” brought us to a muddy bank with tickling water running down a mildly sloped ravine. He rammed the bow into the mud and killed the engine. I stepped out first and sank above my ankles in the dark brown mud. The boat driver then came around and warned me that I might want to remove my shoes. Since they were already submerged, I decided to simply leave them on.

As I was slopping up the slope with suction and gushy sounding footsteps, a large pig began charging directly my way. There simply was no ability to run and my hands were filled to capacity. I decided to ignore the beast and take my chances. I didn’t want to look like a scared Gringo if the pig was just someone’s pet. I worried that he might attack. My dad has told me stories of mean pigs that could kill a dog or severely injure a man.  I could hear the pig closing in with grunts and weird pig sounds. Our guide from the boat suddenly appeared and shouted at the pig, clapping his hands. The pig turned course and fled into the surrounding trees.

The mud path ended at a sidewalk and the sidewalk eventually led to an open air house. It was beautiful. The bedrooms were enclosed, but the kitchen area, and living spaces were walled on only 3 sides… the open side expanded to a rising dune with a breathtaking seascape beyond.  Hammocks hung in the distance and a sparkling salt-water pool was in between.

It was a perfect lazy night with good food and friends. We were serenaded all night by a barking dog…which is pretty common anywhere you go in Guatemala, and we awoke early to a rooster who chose the yard outside my window as his crowing ground.  The day was off to a calm start on the seaside. The air was salty, the sunlight was warm, and the breeze was cool. Life was perfect.

That’s when we noticed the turd in the pool.

I’ve decided it was the Immaculate Evacuation. There were 4 little girls in the pool. The size of this dookie was epic. It was man-sized. In fact, it was admittedly impressive.  Even if one of those small girls had somehow been able to produce it, we can not explain how it appeared on the other side of the pool.  The pool rapidly emptied to the frantic yelling of parents and the scrambling of children. There was a stray dog sleeping on the edge of the pool, and he carries the blame. I don’t see how though, he was a malnourished dog… and if he produced that tanker in the water, then it must have been the best meal he’d had in his life.

The three boys were down at the beach, Aleksandra was in the hammock, and the adults were all on the porch.  I have no explanation as to the origin of the offending biological waste… but I’ve sure had fun accusing all the kids. And then we had to fess up to the landlord who lives next-door. Kellie and Jessica took it upon themselves to go and explain… and they rest of us didn’t object.  And so Kellie goes to explain to the Guatemalans that the Gringo’s have pooped in the pool. Fabulous.  Kellie put this on her Facebook page, “Phrases you hope you never have to utter in Spanish: "Hay popo en la piscina." That of course translates to “There’s poop in the pool.”
I can only imagine the comments that family is making about the Gringos who pooped in their pool and then complained about it. I’m guessing their saying something like, “if you don’t like poop in the pool, then don’t poop in the pool.”

They had to drain it, scrub it, and refill it as we all went about our day. Every time one of the caretakers looked my way… I felt guilty. It was awkward. It’s been several hours and the pool is still filling. They are pumping salt water up from the ocean.

The sun has now dipped below the horizon and the surf sounds loud against the silent sky. The moon is a crescent evanescence in an expansive sea of stars. The dog hasn’t yet began his nightly serenade and the chicken is resting for his morning act. I’m a long way from that nine degrees below zero morning that I flew out of Dayton, the temperature swing is one hundred degrees!  My toes are crunching in the dark sand as I sit in the darkness alone on the beach. It feels like I am alone on the earth.

This is renewing to my soul. It’s like I can feel eternity here in the atmosphere.  Something is beginning to bite at my toes though and I’m reminded that I’m not yet in that perfect place where my grandparents rest. I’ll fall asleep to the sound of the waves tonight.

Or could it really have been that dog?
I have no idea. It suddenly came from no-where.
Be careful the next time you get in the water.