GUATEMALA 2012: (8) Objects May Be Closer Than They Appear 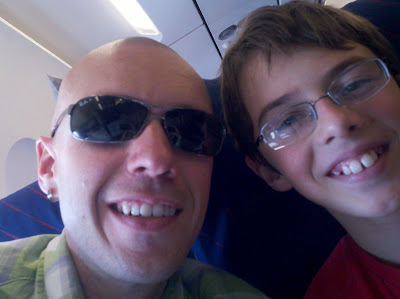 (First Trip To Guatemala for Caleb!)

We considered the fuselage of the aircraft through the glass of gate A14. The sun had risen above the horizon and was casting our image back onto the surface of the window. I could see his expression as it shined beneath the brim of his hat. I had looked forward to this day, and it was inexplicably here.

It was only a few months ago that our family stood on the opposite view of the wall. We had gazed forward to a hoped adoption, a successful trip home, a goal of renting out our home, and beginning a summer of introduction to Guatemala for our children. Our goals were aggressive… a bit reckless, and exciting! I looked into the face of my son and gave thanks to God that we are in this moment.  I considered the reflections both persistent and perceived and I marveled at how close it all stood on the periphery of my soul.

My thoughts are seldom linear, rather they seem to organize by the colors of the memories. Similar shades overlap to form pictures of how I view the world. My mind played in time-lapse fashion the moments that had brought us to this point.
I now type in seat 6F as we cross the heartland of the U.S., heading south to reach Guatemala. I fired up the small red notebook that I use while travelling because I wanted to capture my thoughts. As often happens of late… my action led to something unexpected and better than my intentions. The data recovery program activated and began to open a file that I had typed last year.

I remember writing it as a brainstorming session to prepare for a public speaking event. As we glide across the clouds (and Caleb’s head flops about as he tries to sleep sitting up), I cannot remember if I ever used it… but it remarkably captures my thoughts from the reflections in the glass. And so…

I remember the moment when I became aware of myself and the way I saw everything changed. It was the third day of building a 20 x 20 cinder block home on a mountainside in Companero, Guatemala.  The heat of the sunlight blazed down on my back and my jeans were coated with mud and concrete. I was feeling overwhelmed by the realization that we would not be able to finish this home before we had to leave the country. How could I feel this tired and have so little accomplished for this mother and her three children who needed so much?

I came to Guatemala with this concept that I was here to help the poor. My heart was shattered as I knelt in the mud of the footer and realized that the poverty existed within my own soul. My mind seemed to assault itself with rapid memories of encounters I had shared with the people I met.  I thought of the first night we arrived in the country and watched families walking through pouring rain, making their way through running water and debris in their best clothes with smiles on their faces in order to get to church. This church that they built with their own hands and sweat… using materials that each of them could afford to buy… a single brick at a time. I watched them as they worshiped in this church. I stood there and wept as I felt the intense passion of their belief. I had no doubt that they touched the face of God.
I thought of Edgar, how his laughter and smile could explode into the moment and the incredible relationship he shared with his family; his wife, daughters, and son. Edgar had beaten all the odds. He had overcome mountains in his life that had buried so many. He knew who he was and he had the vision to see what could be… through the dust of what was.

And Ramero… this man changed my life with his own. Have you heard of iron sharpening iron? Never have I seen such life in any person. He would work all day and then he would clean up, change clothes, and lead worship at his church. Larry Renner was on the trip and at 6 o’clock one evening we were all dead tired and beaten by the day. Ramero had not slowed, in fact he seemed to pick up his pace as the day grew long and the sun shadowed the evening. Larry asked him, “don’t you ever get tired?” Ramero smiled, shook his head and replied, “nunca cansado” meaning, never tired.” But more amazing than even that… was the way his oldest boy looked at him at the end of the day.
These men represented everything that I had always heard about God. True belief was the fuel of their lives. They poured everything into serving and loving in the moment. I knew that I wanted to be that kind of man. I wanted to live out my belief. I desired to be looked at by my wife and children the way that I saw theirs looking at them.

I looked across the village that day and I realized that I had a choice. I had seen true belief. I had experienced what happens when love is allowed to give your eyes sight. And so, I had a choice. Truth is powerful stuff.  Unless I shielded my eyes from its intensity… I would be forever changed. I cried that day. I cried because I saw who I was in the light of those who had allowed their lives to be changed by belief… I did not measure up.

Loving people in the margins… helped me see the measure of my own soul.
…and so, we go again into the margins of places to travel, perspectives to consider, and life to be lived. We have found our purpose here in the margin and we widen it to consume the entire page. As we increase the scope of the margin, I realize how small are the cares, fears, and selfish excuses that once filled the page.

Here is the truth I find… that in the book of my life, it is God who writes in the margins. He allows me to read it in the reflection of his light in the lives of those who surround me. And as I look back, He is often much closer than He appeared.

I look forward to noticing his proximity in the eyes of those we walk with this week. I post this with a cup of CRI Java in my cup!