Nobody Will Know The Difference In 100 Years

Growing up, I worked a few odd summer jobs with my mother's father. We call him "Pop." Now, family lore holds that this term of endearment originated from the event of a button launching like a frisbee from the front of his stretched oxford shirt. As the story goes, the button made an audible exit as it was released from said stressed garment.

My father had always taught me when working a job that you, "measure twice and cut once." It was very important that each cut was exact and our job flawless. We would finish and then step back and take pride in the excellent workmanship.

Well...working with Pop was quite different. Pop did general contracting work. He would build room additions, renovations, and even new home construction. I seldom saw a tape measure in his hand. Pop worked with a different sort of technique called, "Eyeball."

He had an amazing ability to stand back, tilt his head slightly to the left, chew on a toothpick, spit out a bit of toothpick splinter, grab a board and a saw... and make the cut. Now, these cuts were never exactly right, but we had ways of dealing with that. Too long, force it in with a hammer. Too short, split the difference and bridge the gap with the nails. Not quite square... force the shape you want in the board and drive a couple of big nails in it.

Most of the time, the correction could be made without much change to the aesthetic. And... on those occasions when the board split, the nail bent over, or it just looked crooked... well, on those circumstances the error was fixed with a grin as he said, "Buck, in a hunnert years no-one will know the difference"

I will tell you, there have been times in my life when the philosophies of both men have proven wise. The real hard part is recognizing when to chose one over the other.

I have bricked and blocked walls, roofed homes, wired lights, tiled floors, built shelves, hung siding and shutters, hung drywall, and framed houses. On nearly all of these things, close enough will get you to a satisfactory state. In plumbing... this IS NOT the case.

With this component you see here, there is no such thing as Eyeball. This has been my nemesis all summer long. Today I finally completed this job. I know I should feel a sense of accomplishment, but rather I simply feel exhausted, grumpy, and fortunate to have my house still dry. Well, mostly dry.

We bought a big house in a nice neighborhood. We got it for a good price because it was nearly 40 years old and had never had a single improvement. It was nasty! Everything was original, including the paint and carpet. I have had to prioritize what we could fix first. The faucet in the lower level bathroom simply wasn't a priority. It was a little tough to turn off and on. You really had to push and pull hard to get it to operate and because of this, I had to replace the knob every few months because the plastic would crack under the pressure.

No big deal... bigger projects to tackle, and money only goes so far. But then it got so bad that it was inoperable. This was inconvenient to our family, but we could work around it. It was an embarrassment though when we would entertain and guests would wander down into that bathroom and then realize they couldn't wash their hands. Well, I was partly embarrassed and also a little entertained since it was always interesting to see who really was concerned about washing their hands!

So, early this spring I decided to fix it. I even downloaded "how to" videos on Youtube. After 3 hours and busted up hands I cranked shut the water to that bathroom, packed up my tools, and walked away. We had a busy summer planned, and I didn't have the patience for this task.

And so... it sat as the calendar turned from April... to May... to June... to July... to August... and finally September. I had a day off with no plans. I had walked by that bathroom countless times while it silently taunted me. The project that I abandoned. Maybe no-one would notice in a hunnert years... but EVERYONE who visited my house noticed it now!

So I went to Lowe's and invested in the necessary tool. And promptly came home and broke it in half. This cartridge was welded in that pipe with 40 years of hair, funk, and nastiness. In my fussing around with the sink and pipes... I had also bent the drain, busted a hole in the floor of the cupboard, and gotten confused which way was on or off on the shut off valves (of course I didn't realize this).

But... my patience was gone. Today was the day of reckoning. And so, having exhausted every tip from Youtube and various DIY websites... I devised my own method of removing the cartridge.

It involved a hammer, a block of wood, a screw, a washer, and a bracket from an old curtain rod. I attached the washer to the top of the old cartridge via the screw, wedged the block between the sink top and the faucet, reinforcing it with the bracket, wedged the claw of the hammer under the washer and pulled back with forehead vein-straining action.

The cartridge (for the first time in 40 years) moved up just a hair. I wouldn't have noticed its slight movement except for the small needle width jet of water that shot directly up my right nostril.

I was angry now. I knew that the water was still on and that just aggravated me even more. I reached down and tried to shut it off, but I had jammed the valve in the open position. Knowing the consequences... and just not caring, I picked up the hammer one final time. This was the moment. This faucet had vexed me all summer... sitting in the back corner of my mind like a shadow. Causing me annoyance and a small degree of ridicule from my friends. "You haven't fixed that YET?"

I wedged in the claw and began a slow and steady pull. As it came towards me by hairs-widths, the stream of water began to increase both in volume and force. And so I continued to pull. And suddenly, the cartridge came lose like the button on my grandpa's shirt and a quarter sized torrent of water hit the ceiling over the sink in an explosive and steady burst.

Laughing like a crazed lunatic I threw towels over the geyser and ran down the stairs and into the basement to shut off the main. Still pulsing with the madness and adrenaline of this death blow that I had struck against my enemy I ran back up and into the bathroom, grabbed by channel locks and forced the valves closed underneath the sink. I am still shocked that nothing broke!

And so now I grabbed the replacement cartridge that I had purchased nearly 6 months ago... and discovered that it was not the correct fit. But, hey... in a hunnert years, who will know right? I tried forcing it in. Close just won't cut it in plumbing.

Thus... the fast-paced three-mile joy ride to Lowes by me and my dog. I HATE going back to Lowes in the middle of a job, and my family won't go with me either because of my cheerful attitude. But Bentley, the family dog thinks that a car ride is the greatest thing in the world, and so I took him to keep me from becoming homicidal. That is his purpose in life. To provide me with balance. ;) 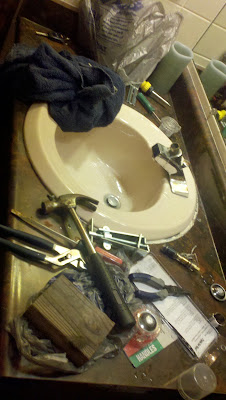 (Yes, to those savvy DIY'ers... I know that you can get free replacement cartridges from Moen via mail, but 6 months ago I was convinced that the job would only take a few minutes and I didn't want to wait 3 days... and today I just wasn't sure how long the valves would hold.)

And so, we got the part, figured out how to install it (be sure to turn off the water and then open the valve... very important both in necessity and sequence). Finally, I put it together and turned it on and absolutely nothing happened.

Here's the weird part. I still don't know what happened. No water would come out. I layed down on the floor and covered my head. I just rested for a moment... and prayed. Not real pretty prayers... but I prayed nonetheless.  And then I got up, took off the diffuser, pulled up on the handle and out came water.

I celebrate for a brief 10 seconds until I realize the drain is now clogged and water is everywhere....
but eventually I fixed that too.

So, today was a little about persistence, patience, perspective, and lessons about life. Lessons of balancing what is urgent with what is important, and lessons of discerning what things can be "close enough" while other things in life simply must be "just right." And so I guess this closes out the Summer of '11 for the Shepherds. And, I think we did pretty good. I think both my dad and my pop would approve. Sometimes the grass got a little tall (thanks dad for helping) and I had broken stuff all over my house, but we walked the summer together as a family. We laughed, played, did some work, and drank deeply of this incredible gift of togetherness that we have. We made new friends, and discovered far more than we ever expected.

And I can tell you this:

even with just my simple eyeball estimate, I can tell you that what we do now will indeed make a difference in the next hunnert years. Hug your family and be nice to your dog. Find something to pour yourself into. Find a place to give. I know a great cause...

(Just don't expect that my faucet will still be working.)