There is one part of spending a week in San Cristobal, Guatemala with Catalyst that is absolutely excruciating. Many of the minor inconveniences that we encounter along the way have become my fondest memories, such as  wasp infested toilet holes and mid-day monsoons.
But, there is truly only one experience I have had in Guatemala that was emotionally devastating. And that is...
... leaving.
We had loaded our empty suitcases into the van, checked our passports and boarding passes, stowed our coffee, and knocked the dirt off our boots. It was time to load up for the final van ride up the lane and through the gate in order to make our way to the airport.
The van was full and the engine was idling, the only thing left was for me to get in and shut the door... a fitting action to symbolize the closure of this incredible week. And then I looked over at Pacaya.
All week I had been trying to get a clear picture of the peak, but steam from the volcano covered it in the morning, clouds covered it during the day, and darkness cloaked it at night. But, as I lifted one foot into the van and reached for the door... I saw that the horizon was clear.
How fitting. The week had of course involved a good deal of work with my hands which coincidentally resulted in the freeing up of my mind. As the sun passed overhead each day and slipped behind the mountains it acted like a wiper blade that cleared the muck from my perception as it swept across the plane of my mind.
I landed in Guatemala a heavily burdened man. Physically with 200 pounds of donations, and mentally with the baggage of my daily demands. I stepped out of that van relieved of my plunder. The donations had been given and my perspectives were now clear.
I ran up the steps to the unfinished second level of the Team House, sidestepping rebar and concrete blocks. I slowed at the edge and watched the dust swirl around the toe of my boot. I raised my beloved DroidX towards the volcano... and a captured one final and absolutely perfect shot.
I have stared at two pictures every day since leaving. This picture of Pacaya that reminds me of the perspective that I need to keep every day, no matter where I am. And also this one, that is now the wallpaper on my phone. 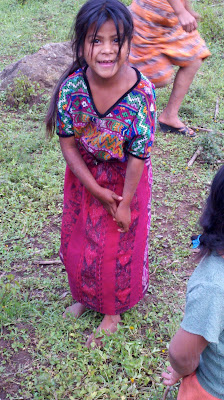 She seized my heart with her gaze and her smile. I first saw her across the crowd at our dedication after the homes were completed. She came directly to me and we played with flowers and sticks while the songs were sung, the prayers were prayed, and the message was given. I swear by all that I am that the gaze of God stared out to me from her eyes.
I was humbled as I realized that it was I who was receiving a priceless gift. Even now I am slammed across my forehead with the words of Jesus, "as you have done to the least of these... so have you done unto me."
Who am I to play with sticks and flowers with the God who formed it all? Reality and deep truth has a way of being in our face unbeknownst to us until that moment when it is suddenly and powerfully revealed.
As I write these fleeting thoughts tonight I am acutely aware that it is exactly 40 days and 40 nights before I am able to return to this land of my awareness. Each day is now spent in telling the story to all those I encounter. This story that changes the course of my life. That remade the content of my heart. That reminded me that the message I believe is more than religion... it is alive.
The fingerprints of God were pressed into my hand that day as I was gripped by the hand of this small, beautiful girl.
The perspective of God was seared into my memory that morning when I stole that fleeting moment to take one last glance.
I am so grateful that a way has been provided for me to return in a few short weeks. I am reduced to goofy, teary smiles when I think of my uncle and my cousin who will join me on this journey. I am so excited to see them experience the wonder for their first time. To return again with my friends who have shown me the grace that it real... to embrace again the people who have shown me that the joy of the lord is life eclipsing...
... this just drives me to want more. More of you to come taste and see what you long to believe. More of you to feel the tension of parting with your sweat and stress earned cash... and to see your face when you realize the difference you have made forever in the lives of children who are indeed the small hands and calloused feet of God.
In 40 days God held a family and a menagerie of animals while the storm raged and the world was purified. I pray that in the next 40 days he holds us tightly and that we see evidence of his gaze.
Because if we see Him... then we are compelled to action.
My boots are beside the door. Another powerful reminder that my steps must matter everyday. I look forward to posting the picture of this COMPLETED Team House... and I hope that you are able to say that you helped build the walls.

Generations will be changed by the work that launches from this building.
Posted by Chad P. Shepherd at 11:47 PM