CHINCOTEAGUE: Brick by Brick and the Sagacity of Time

At 154 feet high, it hides in the shadow of nothing but the clouds. In 1883 it was raised from the ground a single brick at a time.  I have some experience laying bricks and blocks and it is a very honest sort of work. There are no shortcuts you can take without risking the integrity of the structure. Brick by brick and endless trowels of morter that start from the first stone in the dirt and end with the satisfaction of smoothing the mud over that final piece after it sits level and plumb.

I can only imagine the skill that it took to set that final brick into place 15 stories above the earth. In my discussion with the caretaker I learned that no repair has ever been required on the structure. It was built with skill, with nerve, and a serious sense of stick-to-it-ness.

My family and our closest friends climbed the 175 steps to the top, pausing at the three landings visible in the photo to mark our progress. As I felt my lungs expand and felt the sweat trickle past my ear I reflected on the necessary 15 gallons of oil that had to be carried up the steps by the keeper each day in order to keep the flame burning.

Much is said about lighthouses and many parallels drawn from their role in bringing ships safely to shore and around rocky coasts. Today what struck me was the immense effort required to construct it and also to maintain it. If the men who were tasked with those jobs were concerned with an easy life, or tempted to find shortcuts to make their jobs easier, then it would be unlikely that the lighthouse would ever had served its intended purpose. 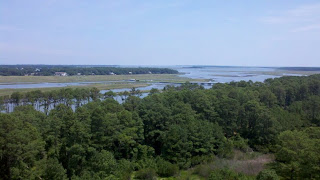 The view from the top was amazing. We stepped out of the heavy, stifling air of the upper chamber and into the sunlight and cool gust of the exterior landing. As our eyes adjusted, we began to examine the circular horizon.

This lighthouse has stood far longer than the men who build it. Those hands that knew hard labor and bore the evidence of callouses and cracks had long since laid down their tools. I thought of the men who had set those lines and tapped those brick into place. I thought of them risking their own safety as they made that climb every day. And I wondered what their lives were like when quitting time came each day... did they have children at home waiting to see them? Did their wives anticipate their return each evening with a smile and an embrace? I have to think that they knew that their sacrifice was for building something that would change lives, and for something that would last. Something bigger than themselves-- in every sense of the phrase. 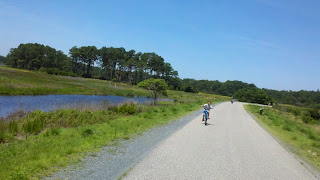 We came down from our experience with history and we mounted our bicycles and we sought out the loop trail that we had seen from the top of the lighthouse. As I was riding out ahead, I pointed my camera backwards and snapped a random shot over my head. I continued to ride as I held the camera and reviewed the shot. You can see my son, Caleb in pursuit behind me. He had left the crowd and was racing behind me as we circled the loop in the 95 degree heat.  The thought that has captivated since that moment is, what will I build that will last?

When I have been forgotten, will there be anything left standing to bear witness to the life that I lived? Do I have the integrity and the sagacity to wear the callouses of hard work on the hands of my soul? Do I have the patience and the nerve that it takes to build up that tower? As my children follow my example and I feel the weight of their children's gaze on my back, will I leave for them a legacy that reaches beyond my days on the earth, or will I allow my existence to blow like the sand that whips over the surface of the beach?

You see... this is me. Not so much to look at really. I like funny hats and I have a few tattoos that mean a great deal to me. I am a person who gets lost in his thoughts. I need things to ground me, and to provide constant reminders of who I am, where I have been, and where I intend to go. I look at myself and I wonder what my children see.

I know that I am capable of paying my bills and fulfilling my professional obligations in my job. But lately I am concentrating on trying to be a better man, a better husband, a better father, a better son, a better friend. I am not always successful. My failures have to be lessons learned, but they can not be barriers that impede my journey.

As I look back at the horizon of our shared life to this point, I am relieved to see some order emerging from the path. I think success is not whether my name will ever be remembered, but rather if the time I spent and the work that I gave, along with the fervent embrace of those I have committed forever to... bears evidence to stand as a beacon. 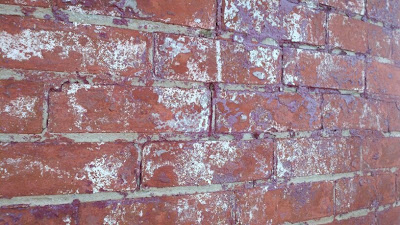