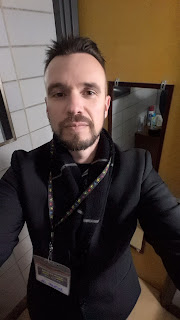 This was me, sheltered in the teacher's restroom after one of the most challenging days I've ever experienced to earn a dollar. The final call of the day had just rang out from the intercom, "Students who ride bus, Red Giraffe are now dismissed to the bus area." I'm feeling one-third insane, one-third inadequate, and one-third in awe.


Just a few hours ago I held the tiny hands of two souls.

One little boy, let's call him Taylor, had the most beautiful blue eyes that I've ever seen. They were bright and endless, but their magic came with a harsh price. They were crossed with such a severity that depth perception was impossible. He understood my words, but his verbalizations were limited to a few simple sounds that came only with concentrated effort. 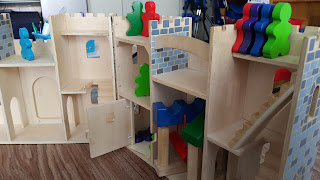 Much of my day was spent in his embrace, with his head pressed up against my own, and my suit-jacket now bears crystalized evidence of his pure affection, anointed by steady streams of saliva and nose-drip. I'll confess to at least eight moments of gag-reflex suppression. The most critical moment was when I nearly vomited after his spit-covered fist somehow slipped into my open mouth, leaving a spit trail in my beard.

He was thrilled with the tower I'd build out of little wooden people. When it fell from the impact of a series of dominos, he lit up with sheer joy, and my face filled up with his fist of celebratory saliva. He shrieked with joy and I nearly barfed. I've never felt simultaneous feelings of success and revulsion. I suppose I'm glad that it happened, but I don't want it to ever happen again.

My other hand had held on to Xian.

He was abandoned in China right after birth. Orphaned no more, he now is very loved by the family who adopted him here. His little life has already known more pain than most of us will see in a lifetime. He has had multiple open-heart surgeries, lacks the cognitive ability to speak, and carries a diagnosis of severe autism.

He beats himself in the face when frustration overcomes his mind. This compulsion has cost him some teeth, and damaged the roots below. He seems to never be comfortable. He can't sit still, but it requires pain and effort to move. His default action is to hug you, but he may also quickly bite, pinch, or hit you if he becomes overwhelmed or feels threatened. Then he deals with his own remorse and self-punishes while punching again his own face.

I see the brokenness of the world reflected in them. There is so much beauty... and so much pain. It's all there concentrated in them, the best of us and the most damaged of us, all crammed into those little cute, volatile human spaces. Who among us doesn't at times feel exactly this same way? How many times would we like to cry out at injustice, or lash out at the pain that surrounds us?

I look into their eyes and I see myself. 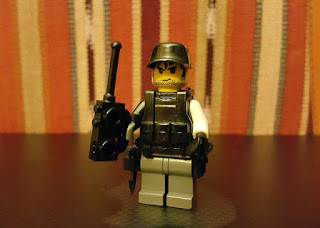 And there was this one little fella. I couldn't get rid of him. Literally. He would run up my backside. In my attempt to teach the tiny human multitude, I'd lose track of him only to realize that he was again standing behind me. He asked questions at all the wrong times (constantly), and wanted my full attention.

He asked me if I had a little boy.

What do you do when a little fella asks if you'll be his daddy?

At the end of the day, he came to me and said that he loved me. He extended out his hand and held what has always been my favorite toy, a little lego man. He looked up at me and said, "You can have it if you want it." I told him, "Oh, thank you so much. That is very kind of you, but I just can't take your lego man. You need him more than I do." He said, "No, you have to take him. I want you to have him and I have more at home." Again I said, "No, He needs you, but you can think of me when you play with him."

He walked away with the lego man in his hand. The bell rang and the students filed out of the room.

And so, at the end of the day tonight, I was thinking of Xian and Taylor. I was thinking of my little lego buddy from a day ago. I was reflecting on how exhausted, spent, and somehow filled that I find myself tonight. I gave thanks to God for the remarkable care-givers that work in those schools, the loving parents, and the grace that lives in the beautiful brokenness of those tiny humans.

Our family has a big weekend coming up. We're going to stand for a vote of affirmation at a church. Hopefully we'll soon tell you of our new home.

I was cleaning out my leather bag that I'd carried this week, and in the bottom, looking up at me with a side-ways grin, I saw the little lego man. That little fella from two days ago had walked away from my refusal to receive his gift, and he'd slipped it into my bag on the other side of the room.

I have a treasure now. This little lego man will go with me to my new office in a few days. When I look at him I'll remember the beautifully broken tiny humans that taught me so much.

How to see with broken eyes. How to laugh with a crying face. How to give hugs when the world offers fear. And how to give when you see someone overwhelmed and trying.

When Jesus saw what was happening, he was angry with his disciples. He said to them,
"Let the children come to me. Don't stop them! For the Kingdom of God
belongs to those who are like these children.
Mark 10:14