Breakdown in Solola: (8) Peeing in the Dark

I just started laughing. There was nothing left to do... and so I just threw back my head and laughed, the kind of laugh that starts somewhere deep in your gut and bursts up through the top of your head. You know, the laugh that shakes your whole body with relief and makes you gasp for air. I think it was just my final and full yield to the situation, an acknowledgment that it all comes down to God. I really don't have a grip on this thing we call life... at all. And it's ok.

The driver however, was not privy to this inner dialogue. He looked a little scared and I heard him explain through my snorting and tears that the truck was roto (broken). I replied, es no problema. He repeated my words with a furrowed brow and I just raised my palms up with a shrug and said, "si, es no problema" and then resumed the cathartic release in that truck cab on the side of the mountain in the darkness, with help still over 2 hours away.

The driver climbed out of the cab and began to bang around under the truck. Using the light of Caleb's iPod, I found a plug for a car charger. I opened the door and jumped out into about half a foot of water (of course) and then climbed up the truck bed and inside of the Terracan. I found the car-charger for my phone, climbed back into the tow-truck cab and plugged it in. Remarkably, it worked even though the truck was shut off.

My phone, the phone that I had received calls on all night, was so dead that it took several minutes of charging before I could turn it on. Crazy God. Who says miracles don't still exist? But a miracle in a cell phone? Sounds absolutely crazy.

Caleb and I sat in that cab while the driver continued to attempt a repair. I have no idea what was wrong with it. But I did know that I needed to pee, and so did Caleb... and so off into the darkness we went. There was an old bus abandoned off the side of the road and it provided perfect cover.

We returned to the truck, the driver climbed in and turned the key. The engine fired up and off we went, heading for home. He shuffled around the visor, selected a CD, cranked up the stereo, and drove like a maniac.

From the speakers blasted the voice of Kenny Rogers, singing "Coward of the County." I was exhausted. I was spent. I was feeling my own mortality. I listened to the words of the song, and somehow became deeply touched. So now I was singing along at the top of my lungs, wiping tears and slinging snot. "Sometimes you gotta fight when you're a man."

As I sang, Caleb was sleeping sitting up and his head kept going from my shoulder to the drivers shoulder. The driver just kept driving faster. I think he was motivated to get these gringos home.

Meanwhile in the other car... a sleeping Sterling had pee'd not once, but three times on the lap of her grandmother. Sharon had no other option except to accept the christening. They all sat crammed in that tiny car, soaking in baby pee while the driver drove down the center of the two lane road, scrunched up over the steering wheel.

Eventually, we caught up with them parked on the side of the road outside of San Lucas and the tow-truck took lead as I directed the driver towards our colonial. He must have had enough of my singing, because the last hour had been without music... with him talking loudly in his cell phone. Talking about the gringo in his truck.

I can understand quite a bit more than I can say. He apparently wasn't aware of this.

And so... we pulled up, completing a 3 hour drive in about 8 hours and I had to explain to the 3 guards at the gate of the community why I now had my car on top off a truck and my family crammed into a little white clown car soaked in pee.

They lowered the shotguns and let us through. After the not so simple task of explaining to the driver where to turn, we arrived home and lowered the Terracan to the ground. I signed the necessary papers and watched the tow-truck and car pull away. It was 11:20 and we had all made it home.

It was nothing short of a miracle.

In our family we always talk about looking for the "God moments" in the course of a day. This had been more than a God moment... but there would be plenty of time to consider all that happened. We all collapsed into bed and let the night take us.

I sit here at my desk with sunlight streaming through the windows and the sounds of my kids playing upstairs. The Terracan is parked in the drive fully repaired. The water pump had failed, causing a chain reaction of destruction: the cap blew off the radiator, the gaskets blew out of the transmission, a valve had jammed in the engine block, the oil filter had blown off... in total, 17 components of the engine had failed. All starting with the failure of a water pump.

We had been pretty worried about the cost of the repair. Resources are very limited. Our budget has no wiggle room! But God wasn't finished with this story yet. After working on the Terracan for over 2 weeks, the mechanic drove it to our house and handed me the bill. Q6,283.50 which converts to about $750.00

I wrote him a check, shook his hand, drove him back outside of the community gates and drove back in silence.

Let me tell you what I love about my family. The next morning, we got up, had breakfast, loaded everyone, including Remus the dog, into our 1998 Chevy Blazer and turned tires onto the highway, taking a day trip to Antigua. You get knocked down, you get back up again.

I started this story out by telling you that I never pray for safety. And that's true. I still don't. We just aren't promised safety. Great things aren't accomplished by being safe. Jesus himself told us that in this world we would have trouble.

But, He also told us "to take heart, for He has overcome the world." 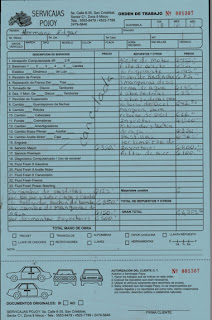 By the way, in two days I am driving back to Panajachel. Who wants to come?

Email ThisBlogThis!Share to TwitterShare to FacebookShare to Pinterest
Labels: Breakdown in Solola