God always speaks to me, and sometimes I listen.

So often people say to me that God just isn't speaking to them. But Jesus said that people who have ears should hear Him, and people who have eyes should see Him (Mt 11:15; Mk 4:9). Paul wrote that God has revealed Himself to us since the beginning of time, through creation (Rm 1:18-30) and Moses wrote that the word of God is never out of our reach, but is in our hearts and words (Dt 30:11-14).

Who are we to say that God is silent? He speaks to us constantly in the world He created. By His words, He spoke creation into existence. Certainly, the action of speaking words from our own mouths is evidence of His image imprinted on us.

Yes, God speaks to me always, and sometimes I listen. 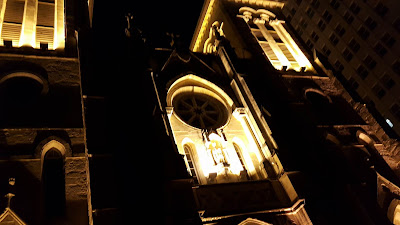 I stood at the base of this cathedral in San Antonio, Texas this evening, reflecting not only on the path that led us through Mexico, but the greater path that has landed my family in this place of obedience as we've listened to the voice of God. 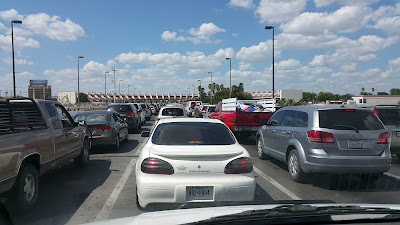 As I sat beside my uncle at the US border at Laredo, I expressed to him a declaration that had been unspoken and held in my heart.

"You know, I can say from deep inside my heart that we are running from nothing. Everything in Guatemala was being blessed. Our identity as missionaries had been solidified and we had a clear plan of moving forward: with the church, and with the mission.

With everything that is in us, we run towards the voice of God. He has prepared us for this moment. While it seems hard to understand why we would go when things seem to be better than they've ever been.

But, I know without doubt that this is our call, and so while some might think we run from Guatemala, we use it as a platform to run towards our continued call." 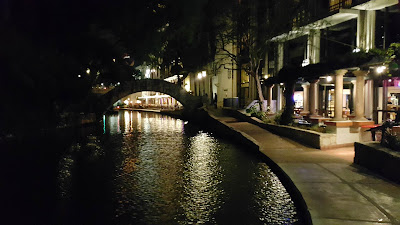 Tonight was such an affirmation of that call as Stephen and I walked along the River Walk of San Antonio. It is no mistake that this was my third time here.

The first was in 1992 when I was here with Towne Boulevard Church of God, Towne Teens for the International Youth Convention (IYC). Kellie and I were dating and that week was a time of direction for us; both as a couple, and also in our spiritual walk. I remember the call of God on our lives at that time. We knew that He had a plan for us together.

Then we returned in 2012 when we travelled for missionary orientation with Commission to Every Nation before moving to Guatemala as full time missionaries. Again our faith was affirmed and shaped as we began to understand God's call on our collective life.

And now, in 2016 I walk these sidewalks alongside the water, contemplating how this ground now guides me along familiar paths, again with the future spread in front of me and Kellie, each time here like fresh assurance of the days to come.

This is a time of peace in my heart. Through days that many fear are full of uncertainty, I walk with a calm assurance that I have not felt for some time. It isn't such a mystery though... I know that I walk with God. And even though Kellie is now on the road, traveling with her family and our kids to Niagra Falls for a few days of rest... I know that she is right beside me in this walk.

I also give Him thanks for our children who share this same fearless spirit. It is no mistake that we are called here, for such a time as this. Even as I type in the hotel room with the glow of the television, I here the steady breathing of my uncle in the other bed beside me and I am reminded that God provides exactly what and who we need... when we walk in His path.

Since our separation from Antony (our lifeline), who helped us navigate the Guatemala/Mexico Border and multiple police checkpoints, our progress through Mexico was absolutely providential. Tuesday through Thursday we were stopped at only two checkpoints, one waiving us through, and the other ordering us to pull to the right... but I continued driving forward, and the soldier allowed us to pass.

We drove through three other checkpoints that were unmanned, or where we witnessed the officials simply walking away as we approached. Our path was unobstructed at ever turn. The drive through Mexico was simple and easy.

There simply is no better place to be on earth, than walking beside our God. The drive continues tomorrow as we begin to head east across these United States, continuing to listen to the words that God speaks.

Email ThisBlogThis!Share to TwitterShare to FacebookShare to Pinterest
Labels: Back in the United States: re-entry, Driving Through Mexico, GUATEMALA