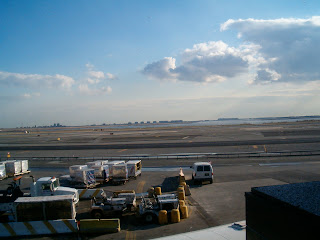 There is something intangible with the sound and slight shake of an aircraft that is strangely comforting to me. My rudimentary understanding of lift and thrust and the air as it is manipulated by the curvature of the wing was enough to give me  contentment as we passed over the landscape below, marked only by a glancing reflection of sunlight and a soft, white contrail. My eyes searched to focus in the midst of a dense cloud, and then my pupils retreated with surprise as we burst through to deep blue sky. The wheels banged shut in the belly of the plane, sealing closed as we reached the altitude that would cradle us for the next 12 hours. We made a final turn and saw La Guardia bid us farewell. Our footsteps would next fall on foreign soil.  We double checked our Passports, and settled in for the flight.

I have many stories I could tell, of passengers on the plane, or perhaps the adventure of customs,  the sense of relief we felt when we realized we had found our contact at the airport, or our many adventures searching for bathrooms in desperate moments! Instead, I will tell you what I remember with absolute clarity.

I remember the huge iron and wooden doors.  The massive concrete structures of central Moscow were all painted with the same dead color. We climbed up four flights of the endless stairwell, and walked through a doorway that had previously granted entry to the ruling class of the Soviet Socialist Republic.  We were placed in a small concrete holding room and told to wait. The door shut heavily behind us and the latch slammed into place with an echo that made me realize how vulnerable we were at that moment.

We waited. We watched other people come and go.  And then, our interpreter came for us and took us into the office of the Minister.  We were handled a single photo.  In that photo was a very small and very naked tiny baby girl.  We were told she was thought to be about 3 months old, with possible health concerns, but no details were available.  We were told that we could accept the referral now, or refuse her and view a second photograph.  We could then either accept the second referral, or go home. It was made clear that we were to make this decision immediately. The necessary medical exams could not be completed unless we accepted the referral, and paid the cost of the exams and labs.

This was not a surprise to us. We knew that this was the agreement. We had been praying for this moment for nearly a year. We held the photograph and accepted the referral.  We then had to hand the photograph back, sign the documents that we could not read, and leave.

The orphanage was located in Orekhovo-Zuevo, 100 miles east on the outskirts of the city. We were to load back into our van, and make our first of many road-trips. Nearly 3 hours later we arrived at the orphanage. The entrance was a wooden door with a small handle, set into a formed concrete wall with no windows. We were about to enter a Soviet-era structure at the end of a dirt and gravel road, 5160 miles from home, unable to speak the language, led by total strangers.

We approached the door, along with the other two American couples who were selected for potential adoptions. I paused a moment, and was transfixed by my surroundings. Like I experienced on the plane when we first left La Guardia, time seemed to take a break so that I could  notice what was happening.  The crisp, never-ending wind was passing through the branches of the surrounding birch trees, I felt the gravel crunch under each step of my shoes and I felt my hand in the hand of my wife.

Awareness then found my mind. We were here. This was the moment we had prepared for so long to reach. Ahead of us was the door that would lead us to our daughter. I remembered the peace that I felt on the airplane.  I had thought it was due to the reassuring hum of it's engines and the rocking in the air, but no. I felt that same sensation now... and I remembered Psalm 63:7, "because you are my help, I sing in the shadow of your wings."

These were the wings that comforted me. I placed my hand on the heavy door, and we stepped through.

To Continue, click the link below:
Aleksandra Elise: (4) A Clandestine Operation of the Soul
Posted by Chad P. Shepherd at 12:38 AM