I am Going to Buy a Van, with a Dollar in My Pocket 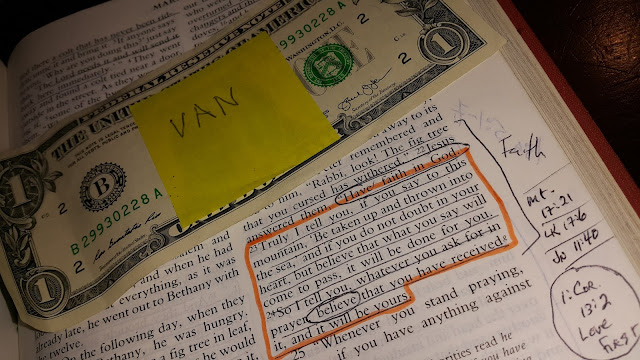 Tomorrow I'm setting out into the city with Manuel to take hold of the van that God has given us. I feel a bit like Abram when God told him to go and claim his land and Abram set out even though he didn't even know where he was going.

God is saying "Go." Our entire team hears it, and so we're going out tomorrow with no available funds, some friends who are willing to lay down a small downpayment, and belief that the money is coming down the pipeline by God's timing.

In our Firstgiving account we have $6,000 in from Ansonia Church of God and $1,000 from the Harbron Family. Another $5,000 is processing now from Dayspring Church of God. We are praying that a third church comes through big.

We have no idea how much this van is going to cost, but God is sending us out to search for a 2003 Ford f350, 15 passenger van. How crazy is that specificity?

This isn't the van we were originally looking for, but this week God has sent two separate individuals my way, who both spoke that we're looking for a Ford. I have no idea where one is to be found in the city. All I know is that we are stepping out to claim it. 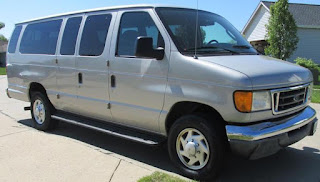 I believe that He will send the needed money. By my calculations, we need at least another $6,000 to make this work. I am praying, believing that He is now providing that solution.

The dollar pictured above was given in faith by a man from Dayspring Church of God this past spring. His act of faith has turned a dollar into a van. We simply have not yet taken hold of what God has already attained.

I believe there isn't enough faith in the world today. There just aren't enough good people who are willing to throw full belief into God. Surely it then must be that there are a few men and women who are willing to lead the way by allowing their lives to be forfeit to the call.

Let it be us. Let it be now. Let this be the call to all who would have the faith to believe, the small hope buried deep inside that maybe, just maybe God's words are true. Maybe He is who He says He is. Maybe our faith in Him, when we deeply believe in prayer, living lives of His love... really is enough. Yes, enough to throw mountains into the sea and certainly enough to pick up an old used van.

God has given us a ministry. He has surrounded us with all that we need, short of a van. He has provided us this far, and now He will take us the rest of the way. Whatever tomorrow brings, whether the dramatic conclusion of a white van in our driveway, or more needed lessons to shape my character along the way, I need you to share in this journey.

Your amount is needed. Whatever that amount is, don't hesitate. Hit that link and join me in witnessing a single dollar turning into a van.

My friend... it is time to believe. It's no mistake that you found the end of this blog. Hit that link and give wheels to faith.

And pray for us tomorrow. Pray that we move the right direction, that we are obedient to finding what God has set before us. May we search with open hearts and hands.

I'll update everyone tomorrow night. Let's see what God does.