Do We Believe in God Enough to Trust Him? (A Van for One Dollar)

You only live once, so why live boldly? While on the Guatemalan Pacific coast a few weeks ago, I noticed a Guatemalan man, probably around 60, with his shirt off displaying his large belly and dark chest hair. His family surrounded him and he looked peaceful, confident, and happy. I admired him in that moment. He embraced life with confidence. His happiness was apparent.

Let's get into it now!

So the question really just comes down to... "Am I living the life God is calling me to follow?" If the answer is yes... then surely its time to be bold.

Last night I decided to go public. To be bold. To openly declare a need, and to openly state my faith. With a dollar in my pocket, half of the budgeted money needed coming through a fundraising site, and the rest only a distant vision... we set out this morning to claim the van that we believe God has already given us.

My bold statement was that I was going to buy a van with a single dollar in my pocket. That dollar had been given to me last spring with a statement of faith, "God will give you a van. Here's the first dollar." 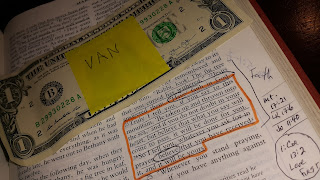 This is the story of our journey today as I shared it with the world blow by blow, the good with the bad.

This was my second tweet, an hour later. Our efforts had produced NOTHING. Zilch. Zero. Nada. I can't explain how... but this emboldened me. We had no results yet, but we were on the street, in obedience. I thanked God.

Even with no results to show at the end of the day, I could report that with the knowledge that we honored the direction given to us by God. There is value in following Him, even at the expense of personal failure. The idea of importing a Chevy from the US didn't appeal to me. Sorry Chevy lovers... they took the bail-out. No thank you.

And so... there we were. Unsuccessful, nothing tangible, no evidence of anything other than foolishness. Except that... we have faith. We believe. We know that there is no better path than a path of obedience. Come what may, this is where we choose to be. Our God is worthy. We are blessed.

Well... the hours had passed with still no solid results. The day was hot and we were getting grumpy and tired. Antony leaned forward in the car and asked if I'd checked the local OLX classifieds. I told him I already did. He said, "Check it again."

With nothing better to do, I pulled up the website and after three search combinations and his advice... something popped up that I hadn't seen before. An automatic, white, Ford F-350 turbo diesel, 2004. 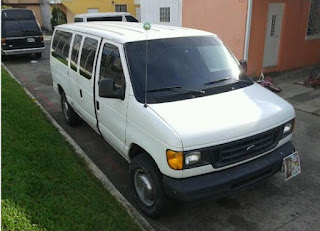 How about that? Almost identical to the van that I had envisioned. I'd been off one year. Well... I'd done my best to identify the year based on the image in my mind compared to internet pics. I figured it would be a 2003 because there were significant engine changes in 2004 and I probably wouldn't be able to afford it. But, this van was within my price range.

We called to find some disappointing news. The electronic fuel injector was bad. Our mechanic said that we should avoid it because the bad fuel injector could mean further engine trouble.

I was disappointed. The van seemed perfect. It had been better than I hoped. The diesel would be cheaper than gas. I sought out a second opinion with our mission leader, Fontaine. His view echoed my own... in fact he joked that if I didn't buy it, HE WOULD!


The fuel injector is a common malfunction and easily replaced. Our little crew stopped for lunch, and then we called the man back... to schedule an appointment to see the van. It seems that God has chosen to honor our obedience and our faith.

In order to proceed with both faith and prudence, we spent another two hours scouring the city. The only thing we could come with as a plan b was a manual shift Hyundai Grace, imported from Korea. Clearly it had been used to transport small children, evident from the creative artwork on the windows.

We're going to test drive both tomorrow, but for me, there really is only one available choice. God placed it in my mind before we knew it was even in the city. Fontaine had mentioned considering a Ford, and our team from Ohio had talked up Ford vans from personal experience. From our conversations... and the intense feeling in my heart, more like God shouting inside my head... I knew today to be the day.

And oh... the money? Well, it was my hope that people would see our story today and donate money. Yeah, that hasn't happened yet. My reaction? I just laugh. I know it's coming.

We have enough to secure it. We're going to go see it tomorrow. God's got this. If you're the solution... hit the link below and give what He puts on your heart.

Be a part of our faith journey - CLICK HERE

He could have seen himself as a failure, but he remained faithful. And you and me are here discussing him now. His words are still just as true today as they were then. Who knows... maybe we're meant to learn something from them.

I love God. I believe Jesus is His son and God incarnate. He was fully man and fully god. He came for me. He came for you. He came to reconcile the entire world back to Himself. He created us to love us. To walk with us. Humanity turned away from Him, and He bought us back with His own blood.

Surely then... there is nothing else to big for Him.