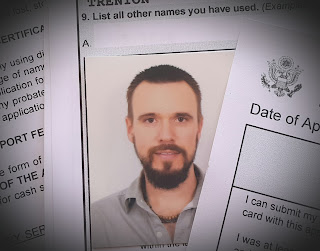 I remember the question a new intern gave to me, "When am I going to see miracles?" I was slightly irritated. I just don't have those on tap. Sure, we've seen some, but I guess I'm just not missionary enough for those to be a daily thing.

I like the answer Han Solo gave to the newbies he found on his ship, "It's true. All of it. The Dark Side, the Jedi. They're real." That's it, yes its all true. We have tough days, we have boring days... and then there are days when we just need a miracle.

I woke up before my alarm and watched the digital figures with dread. It was just two days before Christmas and the idea of driving through the capital to reach the US Embassy worried me to my core. Throw me out in the bush and I'm comfortable, maybe that's just my country upbringing. But I detest driving through Guatemala City.

Last night I knelt at my bed and I prayed, "Lord, I need a Christmas miracle on this."

My US Passport expires on January 5. The matter is complicated by a couple of factors: the Embassy is changing their procedures, and our Guatemalan residency is about to process. The change in procedure is effective January 1, 2016 and requires all passport renewals to be done by appointment. The first available date is February 17. Our residency will be completed before then, and so I am in a bind.

The website of the Embassy gave conflicting information and the links to the necessary forms were broken. Nonetheless, I found an old link, completed the form, printed it out, and decided I'd just wing it. I'd walk into the embassy and plead my case. I've psyched myself up for this for the past week. I knew that I would have to go in with a determined, humble boldness.

Waze didn't fail me and I parked in a safe location and walked towards the hardened location of the US Embassy. Massive crowds stood in long lines. It was 7:40 in the morning, and it looked like I was the last to arrive.

I heard a voice to my left. It was a Guatemalan woman. I can't explain this, I didn't know her, but she felt familiar. I knew that I needed to trust her. She spoke only in Spanish, and it was difficult for me to understand her, but from where she stood, she guided me past the masses, into the express line for US Citizens, and I was on the inside within a few short minutes.

You have to guard against unfortunate oddities here than can unintentionally wreck your day. The security of the Embassy is high and I wasn't permitted to enter with my mobile phone. The guard took my phone, and seized my passport. He said that he had to keep them both. This was a problem because I needed my passport in order to renew it. He held his ground. I could leave, or give him my passport. Day-wrecker!

I reached into my wallet and gave him my US Driver License. Like a Jedi I waved my hand across the air between us and I said, "This is sufficient." I nearly burst out laughing as he said, "Esto es suficiente." Apparently I have both Jedi mind skills and the gift of tongues today.

Now, all I needed to do was convince the agent that I was an exception to the rule. This could go either way, but it was safe to say that I had a bad feeling about it.

To my surprise, the clerk, a young man from the US, was immediately agreeable. Then he attempted to scan the QR Code on the form, and it could not be read by the system. Although I had successfully arrived, entered with my passport, and convinced him of my situation... I was being rejected because the US system did not recognize its own code. I was inwardly seething as I calmly asked, "How can we solve this?"

He pointed me to a pair of dinosaur computers against the far wall. "Complete a new DS-82 over there." Those were some pretty obscure instructions, but I'd figure it out. I found the switch to awaken the screen, located the correct form and begin filling it out as two babies competed for the I Can Scream the Loudest Award. Things went well until I came to the field that required an email.

The @ key would not work. When I punched in the command, it typed ". I tried the control key, the alt key, I tried every combination I could imagine. Everything worked except the one I needed. I cut line, feeling a million stares into my back, as I asked, "How do you type the @?" Of course the clerk couldn't hear my asinine question, and so I had to say it loud enough for the room to hear. This was a new clerk. She was Guatemalan, and she looked like she was having a bad day, and I'd just made it worse. Of course... her answer back was a very loud, "You press the shift key, and then the 2."

Disgraced, I walked back to the computer and stubbornly tried it again. Of course, it yielded the same result. I had to go back to the window, again cutting in line, and went back to the clerk whose day I'd ruined with my stupid question. She says, "I told you, press the Shift key and the 2." I explained that the computer yielded the incorrect symbol. Her eyebrows dropped as she huffed air at me, shook her head, and said, "Well then, I don't know what to tell you. You'll just have to come back another time."

"Thank you," I replied as I walked away... feeling like I needed a Kylo Ren hissy fit. Instead... I again approached my nemesis, the DS-82 unit, and had no tangible results. One of the screaming infants was on my left. Her mother had plopped her beside me, shoving in the corner the other PC that was turned off. Her husband was crowding me on the right side, shoving my papers at me. I was incensed.

I took deep breaths and prayed. My blood pressure lowered as I tried to regain perspective. My life isn't bad. This is just a tense moment. The screaming baby and her mom left... and so did the pushy dad... I imagine his day was about as good as mine.

With no other options, I'd tried everything,even changing the language of the computer in hopes that it would activate the key, I moved to the other computer and located the power button. It took 5 painful minutes to slowly boot. I relocated my friend, DS-82, and came to the dreaded email field. I took a deep breath, knowing that if this didn't work, my day was likely a failure. I'd have to wait until February. This could jeopardize our entire families Residency application.

It was my own fault for waiting so long. I was resigned to either outcome. We'd get through it. Worse things have happened. I pressed the shift key, and I pecked the 2. BOOM. There was the most beautiful ampersand that I have ever seen. Yes... that was a nice @.

Of course then it took a few minutes to teach myself how to print it. I had to convert it to a PDF and send it to the listed printer. I glanced through the glass wall across the room and I saw pages coming out of the printer. I took the chance that those were mine... and then for the third time, I cut the line.

This was the do or die moment. I made sure that I had an assertive posture, and stood expectantly at the counter. Here came my favorite person, the lady who had twice humiliated me. I smiled and said, "My documents are on your printer. The computer to the right is broken. I powered up the one on the left." To my surprise, she thanked me and walked away.

She was calling for a repair on the computer. Ha! Well, things were ending well. My passport would be renewed, and my perseverance would benefit the poor souls who came after me to this frustrating place.

And then came the unexpected turn. As we pulled my photos out of the envelope from Quick Photo, an official Passport Photo Processing Center... They. Were. The. Wrong. Size.

I felt my entire body sag. I closed my eyes in silence. She asked if I had any other pictures and I made a show of searching the envelope. I knew there were none, but I didn't know what else to do. She said, "You're going to have to go get new pictures, ok?" I replied, "Sure, yes. I have no other choice." I gathered my things and took a step away.

"Sir." "Yes," I said as I turned back. "Where did you have these processed?" I said, "San Cristobal." She said, "I'm going to call them and let them know this isn't acceptable." All I could say was, "thanks."

Then she said, "Wait a minute and let me see if we can use these. I'm going to ask the 'Official Photo Specialist.'" I watched her as she walked away from the counter, paused at a doorway, and then spun around walking back to me. I couldn't even look up. I didn't want to see the disappointment on her face. I felt like Ms. Columbia about to have her crown revoked by Steve Harvey.

To my absolute shock, she said, "I consulted the 'Official Photo Specialist' and she said that we can use this." I was slack-jawed before I could mutter out, "This is my Christmas present." Her response was immediate,


"No, this is your Christmas Miracle."

When am going to see miracles? When you ask for them. When you put ourselves out there and need them. When you open your eyes to see them. Today was nothing less than what I'd ask for... a Christmas Miracle.