Guatemala is a place where our power can go out every hour on the hour, rendering the resetting of digital clocks a battle long ago surrendered, and causing our pump to require a manual reset in the cinder-block pump house. Meanwhile we serve in third world villages, and somehow reconcile this with the fact that we can drive down the mountain to the Sankris Mall and be fully immersed in commercialized Christmas. 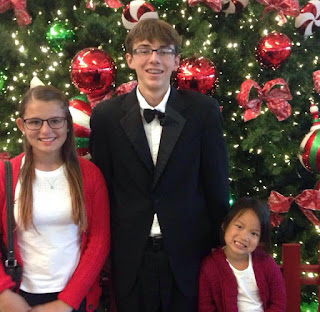 We are blessed by the sacrifice of missionaries gone before us who established the private school where we send our kids in exchange for Kellie's volunteer service as a teacher. Our little school is packed with talent and we were at the mall in order to support the choir and orchestra.

Guatemala is a place where you can still sing about the baby Jesus in a public place. People stop their shopping to join in, and the staff of the mall temporarily shut of the overhead music and commercials. It becomes a holy moment where I give thanks for the freedom here, and also mourn the lack of freedom in the land of my birth. While there is unbearable suffering in this land, there is also such fierce beauty and hope. There are parts of American culture that we wish would never find their way here.

Video by Candy Siklosi (I stole it from her Facebook page)

Our children's voices started softly, like an approaching summer shower, just teasing the outer limits of my hearing. As the voices swelled, each face in the building turned towards the escalators as they came down a cappella. 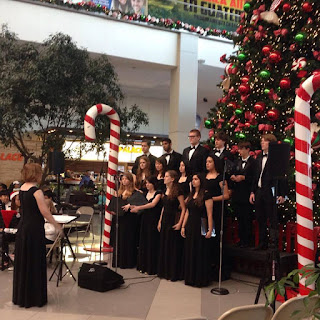 Properly lined up between candy canes and hand-made wooden risers (that'll pinch the dookie out of your hands when you try to set them up), the good news of the birth of Jesus rang out in clear harmonies. 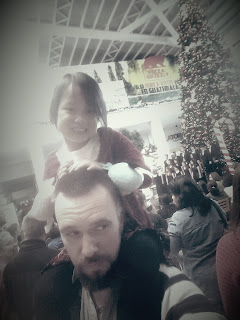 And then... there's me... wrestling the worlds most cheerful and energetic four year old. She reminds me of watching Elf. You know the scenes, his enthusiasm is matched only by his size as he drinks life deep and eats skittles on his spaghetti.

In an effort to prevent her dancing circles around me and nearly pulling my pants down (that would have been a damper on the Holy moment), I decided to put her on my shoulders. Of course she loved this... much to the delight and entertainment of everyone there as she bopped and danced on my head.

My attitude began to grinch as her tiny tail bone began to absolutely drill into the base of my skull, and the bones of her pelvis perfectly aligned in such a way with my shoulders that I realized a bit too late that the blood flow had been cut off of both arms.

I wanted to lift her off, but my two dead arms refused to cooperate and so I sort of jumped and flung her weight first to my left should so the right one could reanimate (along with the dreaded tingles and stings), and then shift her to the left so that I could again have control of both arms.

By the time I could lift her off, my lower back was tying a knot in itself and I'd broken out in a sweat. Since I had enjoyed this experience a year earlier, I knew that we had a long night of music ahead of us. I threw the white flag. It was time to take the four year old on an adventure. 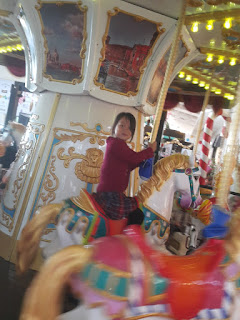 Of course... as we began to walk towards the escalator, she wanted back on my head and for some insane reason, I swung her back up there... realizing immediately that it was utter foolishness. A security guard approached me and warned me that it was "muy peligrosa" (very dangerous) to have my child sit on my head while going up an escalator... and so I immediately complied, explaining to Sterling that it wasn't permitted and we'd go to "Bad Guy Jail" (this concept really freaks her out).

Once we "scaled the summit of the ice mountain" (escalator), we walked to the fairy-tales village where I wrangled beautiful white pony for Sterling to ride as we made our way to the wilderness of the dinosaur encounter (Sterling rode the carousel while I stood awkwardly on the perimeter). 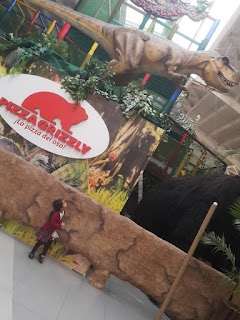 "Daddy, is it real?" Sterling asked quietly as the animatronics moved the great head of the T-Rex and it unleashed a Jurassic-Park style dino-growl. I told her that just to be sure, we should move slowly and not make a lot of noise. This was a brilliant move on my part as it yielded me nearly 5 minutes of peace while the choir and band made beautiful music that bounced off the ceiling and walls of the mall a thousand different ways. 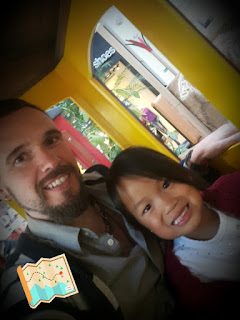 We had to escape the T-Rex! Suddenly Sterling was sure that it was really waiting to eat us. And so... we boarded the fierce locomotive (kiddie-train, "toot-toot!") that carried us away to safety. I was fulfilling a critical role as the brave protector as I rode that train hunched over with Sterling and about a dozen Guatemalan kids that were slightly in shock the with invasion of the Gringo-man into their make-believe. 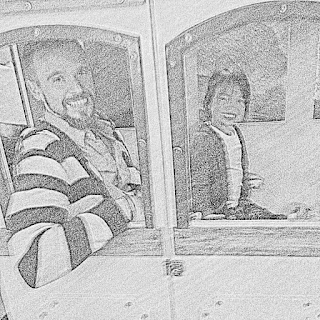 Of course... the train driver decided that it was necessary to drive the train on the sidewalk that went directly over the signing choir and so... all the parents got to see my brave ride as my proportionately gargantuan head stuck out the little train window. What could I do? I smiled and waved like some has-been actor at the Macy's Thanksgiving Day parade.

I was feeling good about myself, thinking that Sterling would always have this wonderful memory of her Daddy saving her from a T-Rex, giving her a magical ride on a white pony, and a daring train escape even at the cost of my own pride... and then realized that she was just angry that I wouldn't buy her ice-cream.

Well... at this point we'd attracted enough attention and I didn't want to look like I was making it rain money since none of the other daddies were doing ridiculous things... and so, we descended the great ice mountain (escalator) and respectfully took our place among the well-behaved and sang carols (endlessly) until the very (thank you, Lord) end.

Other events that made this night memorable: Kellie got hit with a door, Sterling walked into a glass wall, I purchased an aquarium for a turtle, and we nearly left Donavan at the mall.

A good time was had by all. No animals were harmed in the writing of this blog, although Sterling did have a welt and at some point or another I might have said something not nice.

This is the reality behind the beautiful photos. Don't kid yourself... your families' experience is similar.