﻿ ﻿ We rode horseback until the ground became too dangerous for the horses. We then went the rest of the way to the base of peak by foot. Our elevation was 6000 feet. It was a cool and overcast day, but the heat coming through the rock could be felt through our boots and was visible rising off the surface of the lava field in waves.

Just one year ago this active volcano erupted, destroying an entire village and devestating an already struggling population. The man who assisted me with my horse told me of the volume of the explosion and the force of the blast. He and his family decided to return to rebuild. He was born on this mountain, his father and grandfather were as well. He and his wife were resolved that they would not abandon their land and the legacy it holds for them.

I was able to meet his wife and their new baby. This past December, Catalyst helped him rebuild his home. He showed me his chicken coup with his now successful chicken business. He explained to me how ruined his life had been, and how he has found life renewed.

At the top of the volcano we stopped for lunch and had a discussion about perspective. You may know the passage. Larry discussed Philippians 4:8:

This helped as we all tried to put this week in perspective. We looked around us at the majesty and power and beauty that is Pacaya and her people. We also were aware of the tragedy and heartache. And we knew that there are great truths that hold us all.

I have so much more to say, but the intensity of these experiences overwhelm my ability to put it into words at this moment. Tonight we sleep, and tomorrow we travel back home.

And somehow... I feel as if I am leaving home. 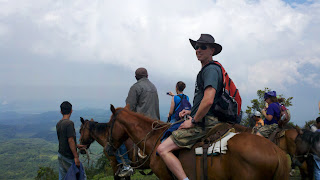