He Never Liked My Earrings but He Loved Me 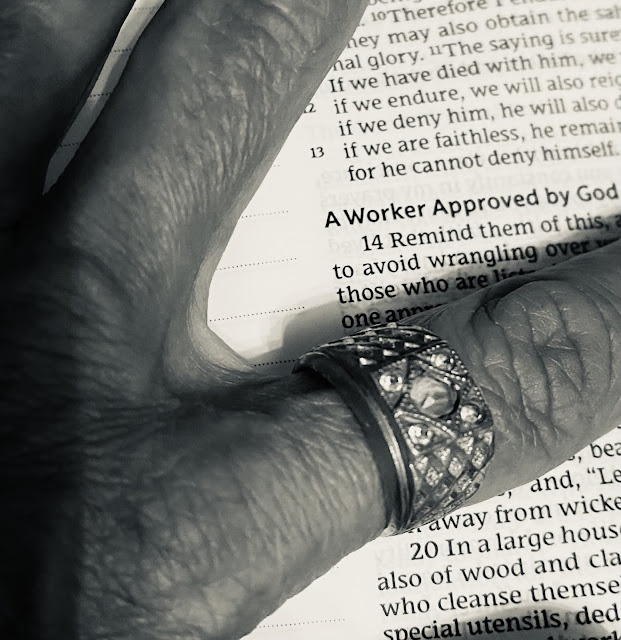 Hi Pop. Are you going to talk to me tonight? It has been a while since you've visited. I miss you and I could really use your conversation.
"Pop" is what I called my maternal grandpa. My mother's dad. His name was Carmel, but to me he is forever "Pop." I never even thought of it as an aberrant referral to grandpa, it was simply who he was. The whole family called him "Pop."
Family lore said that he was "Pop" because at a Christmas gathering, his growing stomach placed too much pressure on his shirt and the button "popped off." According to legend that was the origin of his name... but I'm not sure... I think I knew him as "Pop" long before that episode. I think it just cemented the moniker. Probably, Pop was just what his kids (my mom an her siblings) called him as they grew up. Even so... I love the button-pop story and well, how about we just go with it?
He died. It was a shock to me. He'd been dying for years, but still the moment of his passing just seemed far too abrupt. I mean... he was living and breathing. And then he was just... dead.
No.
I had never had a moment of life without Pop.
His voice had always been strong. His eye contact intense. His words... unfiltered. One thing that he had NEVER been... was silent. The silence was unbearable. It was so evident of his absence.
I remember when we met for dinner at Olive Garden. It was the first time he saw my earrings. He had tears in his eyes and I've never felt so awful. I was making my grandpa cry.
He asked, "Buck (he called all of his sons and me Buck... I have no idea why) are you still my good little Chad?" I answered "Yes." I'll confess now though that I was not. As he feared, my physical appearance was representative of the condition of my heart. But what was I to say in that moment? I did not want to cause a scene at family gathering. "Pop, you know I am. I love you." He nodded and hugged me so tight. So tight.
When I was unfaithful to my marriage so long ago... he came to me. Weeping. Filling my heart with truths. I am so thankful. He saved me then. I returned to my wife and we spent an additional decade raising our children. Thank you Pop. You gave us that.
Here is what I cannot explain. I still talk to him, he visits me while I sleep. The setting is sometimes the living room of his and Mamaw's house on Marcie drive, sometimes it is at my uncle Stephen's house where he lived and died... and sometimes he literally stands at the foot of my bed and speaks to me and in those moments I feel awake and present.
He still scowls at my earrings. And he tells me that he loves me. He asks me how I am doing. He listens to me and he smiles at me. He tells me how much he loves Caleb, and Aleks, and Sterling. He tells me that they are special and he asks me if I realize how blessed I am. He weeps when I speak of my divorce, and he speaks encouragement when I mention my future.
He mourns my losses, celebrates my blessings, and gives me hope for the future. He is my Pop.
I miss his toothpick that he chewed on, his hat that always perched sideways on his head. His scent of Old Spice and wing-tip shoes. I miss his arm that would be around my shoulders on Sunday night prayer meetings. He was my Pop and he made my world feel safe.
And here I am now.
My earrings have grown from two to six. I no longer am married. My household is split. I am at the mercy of a crucified God. And I find mercy. I talk to my Pop at night. I swear it is really him. He isn't happy about every decision that I've made... and yet, he is still my Pop. His love shines through his eyes and he sees that I'm doing my best with what I have in this moment.
That is his ring. He wore it for years. It is 10 carat gold and I don't know if the stone is diamond or composite. Frankly I don't care. The worth of this ring far exceeds it's composition. This ring was on the hand of the man who wrapped his arms around me for so many years... and even now... finds a way to talk to me in my dreams.
Pop. I'm trying here. I love you. I know I've made some pretty major mistakes. But I also know that this story isn't yet over. The God you taught me to love, He is still with me. I cannot escape Him. Your influence covers me still. Your ring sets on my finger.
I look at it daily. Every single day. I see it as your legacy and God's promise. My story is not yet fully written. Your ring, your legacy, your promise to God... it yet lives on in me.
Broken and imperfect. Even Earring bearing... and yet the Love of God and you... compel me. Let's do some crazy Kingdom things... earrings and imperfections and all.
God uses broken vessels. I am a broken vessel. And I still hear you.
2 Tm 2:15 "Do your best to present yourself to God as one approved, a worker who does not need to be ashamed and who correctly handles the word of truth.
Amen.
Posted by Chad P. Shepherd at 11:49 PM