Those of you who view my Facebook page know that I am a highly political creature, and yet I make an effort to keep politics out of my blog. So, this is not meant to be a political statement, although it does come through my overall filter. We all have perspective, and that is the flavor and balance of life.

My path could have been very different. In my graduating year of high school I spent some time on multiple occasions talking with an armed forces recruiter. I was looking at becoming a Chaplain. Ultimately, I became the first member of my family to graduate college when I followed my girlfriend to Anderson University.

I think that worked out pretty good!

I know that we are all here today through the sacrifices of the brave, who put on the line their personal safety, property, and sacred honor to guarantee the freedom we have today. They understood that our ideals and our beliefs are more important than our comfort, security, health, and safety.

Indeed, there are things worth dying for, and I have found truths that are deeper than my own existence. I give my thanks to those who have gone before me, and hope to never put my own benefit before these self-evident truths that were the basis of the greatest country in the world.

The simple beliefs that all men were created equal and given certain rights by God, rights that can not be denied. Simple beliefs that carry the weight of the ages. Rights that were first transcribed by people who have been persecuted as long as history has made record. Wherever there is freedom, it seems there will be those who seek to destroy those who love it.

Whatever your political persuasion, on this day I ask you to reflect on the sacrifices of those who bled, died, and lost family members freely and with full knowledge that their sacrifice was given for a great, deep truth. What we have is truly extraordinary. My soul bleeds when Americans who enjoy these freedoms smear the legacy of the men who gave them the right to do so.

I am an American, and I make no apologies. I have an opinion, and I will fiercely defend my beliefs. Short of the Bible, I believe the U.S. Constitution is the greatest document in the history of the world, and I see the evidence of God in the beauty of our nation. Along with my father and grandfather, I also consider Ronald Reagan to be my hero, and am reflective of his words today. His quote that for me captures the spirit he carried is the one below.

It is my belief that we are all accountable to defend the freedom we posses, and we will answer for how we carried the torch. To whom much is given, much is expected. Happy Memorial Day, 2011. 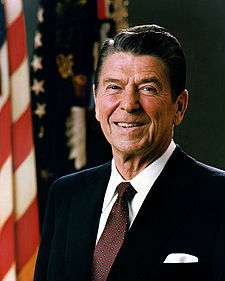 "Freedom is a fragile thing and is never more than one generation away from extinction. It is not ours by inheritance; it must be fought for and defended constantly by each generation, for it comes only once to a people. Those who have known freedom, and then lost it, have never known it again."

Ronald Reagan, 40th President of the United States. First Inaugural Message as Governor of California, January 5, 1967.
Posted by Chad P. Shepherd at 9:35 AM