Life Beyond the Closed Door 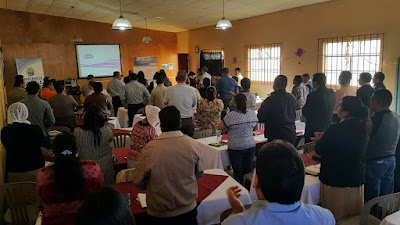 When you think about someone you love that has moved beyond this mortal life, what is the first thing you remember? For me it is an overwhelming burst of who he was. It’s not a single thing, and yet it hits me all at once. The color of his coat, the tilt of his hat, the smell of Old Spice and the gnarled toothpick hanging from the corner of his mouth. He wore wing tip lace-up shoes, the kind with the little symmetrical holes punched near the toes and heels made of thin layers of lacquered wood that was silenced from harsh contact of the ground by a layer of rubber attached carefully with cobblers nails. I miss my Grandpa Mathis.

He would tell me about how someday I was going to be a preacher man. I would try to explain how I could serve God right were I was… and he’d just laugh. He always was convinced that one day I’d find my way.

Death has a way of framing the important parts of life.

While at a gathering of pastors this week my attention often turned to a man from El Salvador. His singing was a bit louder than everyone else, his prayers a little bolder, and when the music played he was the first to raise his hands and worship consumed his entire body. It all just seemed excessive to me.

My God, we all need your grace.

Thoughts changed in my head with dream-like distortion and I remembered Eldon. He had married my Great Grandma Elsie after cancer widowed her from Jim. I regretted that I’d never met Jim, my Mom had told me that he would have really loved me.

I felt his loss even though I’d never met him.

But I really loved Eldon. He used to tell me stories about being a missionary. He had a secret room in the attic of their house that was filled with African artifacts. It had things like a tribal shield and spears. He also had photo albums filled with thousands of black and white photographs of him surrounded by dark skinned, scantily clad people.

He always told me that I wasn’t allowed in that room. But… sometimes I’d hear him unlock the door, and then he’d go sit in his chair where he’d quietly squeeze a tennis ball to ease the pain of Parkinson’s Disease as his eyes would close and I’d watch his chest until his breath was slow and steady.

That’s when I’d sneak into the room.

I didn’t know it then, but my heart was being stirred for the future. I write tonight in the darkness from a cinder block hotel room in Tecpan, Guatemala where I’ll get a few hours rest before rising to an early start of day three of a pastor’s conference that has gathered followers of Christ from Guatemala, El Salvador, Belize, Honduras, Nicaragua, and the United States.

I’m an observer in the corner that understands that God has shaped this moment over decades… probably longer than I know. I learned last week that Eldon’s mother was named Grace and that Grace served with a lady named Faith. Together they worked at an orphanage in India.

My mind goes back to a rush of awareness. As 60 pastors prayed out loud in a Guatemalan church today, I closed my eyes and I was sure that I could hear the voice of Grandpa Mathis giving thanks to God that I had found obedience. I can see the steady rise and fall of Eldon as he waits for my feet to enter the path he helped me to find.

We all need the grace of God to frame the important moments of our life while He quietly unlocks doors that lead to dust covered wonders beyond.