I've told the story of how we received a 1997 Chevy Express 15 passenger van, but I've spent the last few weeks trying to use my imagination to see this story from the point of view of the only one who knew how so many threads would come together to form this strong weave of faith, need, and experience. This is how I believe the story was written by the One who began to author it long before we were aware.

Guatemala : July 2015
The team arrives and notices our need for a van. We explain that the cost is simply not in our budget at this time. After a beautiful week of serving together, Glenn presented me with a single US Dollar, stating that it is given in faith as the first dollar towards our new van. They tell us that God as already given it to us, we simply had to claim it.

Ansonia, Ohio : November 2015
Pastor David Hackney contacted me to tell me that they had heard of our need of a van, and had decided to contribute $5000 towards its purchase. He encouraged me to challenge other churches to match their funds.

Guatemala : November 2015
Kevin Hall, a childhood friend of mine, now a Pastor with the United Methodist Church, contacts me with an idea of a "Banana Box" fundraising drive.

I wrote blog, put together a video, and launched a social media campaign to raise the remaining funds. There was absolutely no response. From all our contacts, not a single dollar was contributed. I made a list of people and churches to call, but felt very clearly that God was saying, "No." I abandoned my pursuits and waited.

Indianapolis, Indiana : December, 2015
Christmas week, Kellie (my wife of 20 years) and I were contacted by old college friends, Brendon & Jennifer Harbron. They asked if they could donate $1,000 towards our van. We were stunned! That single dollar from July now had 6,000 friends. The FirstGiving account had gone from ZERO to $5,000. Still... God was saying, "Wait."

Guatemala : January 8, 2016
Worried that perhaps I'd missed out on the funding from Ansonia, I contacted the pastor and asked David if he'd be willing to go ahead and donate the $5000 on the FirstGiving account so that I could show progress. He agreed.

The following week, while working with a team from Mt. Victory and Ridgeway United Methodist churches (introduced to our family by my childhood friend, Kevin Hall), I suddenly felt a strong compulsion that I knew was God to make a call to Pastor Tim Kufeldt of Dayspring Church of God.

I felt so strongly that I immediately sent a Facebook message to pastor Tim with a simple message...

Hey Pastor Tim... I'd like a chance to bend your ear. I have an idea I would like to discuss.

Nineteen minutes later... I received a phone call from Pastor Tim. He said that I had been on his heart and he was just thinking that we wanted to talk to me, and then he received my message. Within a few short minutes, he had agreed to present our request to their mission board and suggest they contribute $5,000.

I hung up the phone and walked around that village hillside with tears in my eyes. I felt God telling me to next call Pastor Duff with the Breiel Boulevard Church of God. I sent essentially the same message to him that I'd sent Pastor Tim...

Hey Brother... I want to bend your ear for a moment. I have an idea.


I felt a little silly, and I busied myself with the project. One hour and ten minutes later, I received his response, "alright, let's do it." Like with Pastor Tim, Pastor Wes' response blew me away. He said that it was funny that I'd contacted him, because I had been on his mind. He promised to take our proposal to his mission team and also ask for $5000.

After the phone call ended, I was bursting with enthusiasm and started to message a third pastor... and again, God impressed deep and powerfully in my heart, "Enough. Just wait on Me."

Guatemala : January 16, 2016
Utilizing social media as a platform, and with the full confidence of the Holy Spirit in my chest, I set out with that original dollar in my pocket, my friend Antony as translator, Meme the CRI mechanic and bus driver as my wheels, and we set out to visit every car lot we could think of in the city.

We came up with nothing as I tweeted live video updates throughout the journey. Towards the end of the day, we found a possibility on an online classified. It perfectly matched what I'd been looking for, an old Ford F350 Econoline. I'd had previous discussion with two different people, and I'd envisioned this very van. The only issue was that it was at a mechanic's shop with a bad fuel injector. We made a call and scheduled to see it the following morning. Tag line #VanHunt would continue the next day.

Tampa, Florida : January 16, 2016
That evening, friends of ours who had been among our very first donors and have since developed into key partners, contacted me to pledge $2,000, payable in March. What a powerful affirmation this was! While we were only $1,000 off of the purchase price, the reality is that we'd need to pay a mechanic to inspect the engine, purchase tires, a luggage rack for the roof, and reinforced steel for the bumpers. God had provided us confidence for the future.

Mt. Victory, Ohio : January 16, 2016
After being encouraged by my friend, Kevin, I make a call to Steve White, who was with us on January 8th, the day I was making calls to Pastors Tim and Wes. We joked about the trip and all the hard surfaces in Guatemala: chairs, buses, beds, concrete, etc. I joked that if his church would be willing to donate our final $1,000, I'd honor him by declaring the shotgun seat of the van to be the "Steve White Seat". I assured him that it was the softest seat I'd ever encountered in Guatemala! He agreed on the spot to raise the funds!

Guatemala January 17, 2016
The day began with Twitter videos as folks shared with me this walk of faith. I felt energized like I've never known. I was confident that God was guiding my steps.

And then I saw the van. After following a man on a motorized bicycle up a mountain highway and down back alleys... the white Ford van was an absolute mess! It wouldn't start because it's parts were strewn all over the ground and inside the cab. It was dirty, nasty, and dented. Even so... I was sure that it was our van and so we began to negotiate price.

That's when a notification hit my phone. It was my friend, missionary Britt Harman. He said, "Hey man we have an '07 Chevy 12 passenger van in our neighborhood if you're interested in it. I think they want like 12 grande or something." At first I thought, "Naw, that's too much... and we have a van right here." But then, I decided to message my mission director, Fontaine, and bounce the idea off of him.

He was sharper than me in the moment and I was thankful that I had him to keep me from making silo decisions. We got the number of the van, made a call, and set out of the city towards Jocotenango. We found the van... and it was everything I'd hoped to find. It was beautiful. It looked pristine. It was a 15 passenger rather than a 12.

We test drove it and began negotiating price. Of course this was a complicated matter. The guy who showed the van was an intermediary. The owner lived in Canada and his mother held the power of attorney... in the northernmost tip of Guatemala.

Puerto Barrios, Guatemala : January, 2016
Teresa Lopez had been praying. She was a Christ follower and she'd had her van for sell for over two years. She was in need of money and she'd been praying that God send someone to buy her van. It wasn't advertised, it had just been sitting at a property that her son held about six hours south.

Guatemala City, Guatemala : January 19, 2016
The night we exchanged check for title in a parking lot inside Guatemala City, we shared our faith stories and embraced as we realized that God had met each of our needs. This is the type of story that only God can author... unknown people from across the globe, being aligned by His voice, in His timing, to work our divergent paths according to His purpose.

Mt. Victory, Ohio / Mixco, Guatemala : February 2, 2016
I receive a Facebook message from Jeannie Brill of Mt. Victory and Ridgeway United Methodist Church, with the anticipated news that the Church had raised the final $1,000. After celebration with her via Facebook chat, I contacted my director, Fontaine, to let him know that all funds are now secured.

Beginning with a single dollar, eight months ago, this faith journey, this #Vanhunt has been completed.

And I am sure of this, that he who began a good work in you will bring it to completion at the day of Jesus Christ. 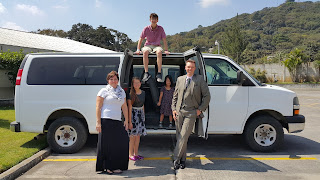 To read the full story as it unfolded, follow it all right here:
(1) Easter 2016 Mission Possible
(2) When God Speaks
(3) I Am Going to Buy a Van with a Dollar
(4) Do We Believe in God Enough To Trust Him?
(5) A Van, a Vision, and a Dollar, This is How My God Works
(6) Introducing the Great White