Ancient Sacraments in a Tired World 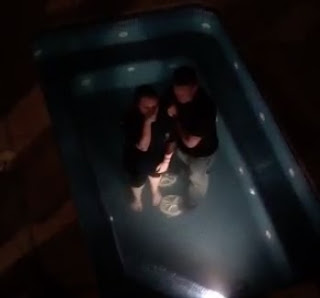 Tired feet scattered dust as the group climbed into the dark and stale room above the stairs. Wooden chairs slid against the plank flooring as the men exchanged glances that told of the difficulty of keeping faith in a modern world that seemed to outpace tradition.

Are we really so different?

The men tried to initiate small talk, but the night seemed shallow and fragile as they contemplated the state of the world around them. At times it just seems like everything we know is being challenged. We don't know whether to run or to fight. All the men could do in this moment... was eat in silence. Sometimes it just has to be enough to simply be present.

The night was pressing in too heavily. The air was thick and heavy. Sometimes life just feels pointless.

Then a single chair scraped back from the table. The night was captured by his actions as he took it by storm. Removing his robe and wrapping a towel around his waist, he knelt on the floor and one by one, and he washed their feet.

This was ridiculous, offensive, and shocking. They resisted, and still he demanded it. As they began to yield, they began to see the night differently. They saw Him differently and they realized how He saw them.

We are not so different.

It remains nearly impossible to keep faith in a modern world. We climb up the stairs and we slide up to the table and we only see the darkness, feel the grit on the floor, and sweat against the stuffy air. The reality that He brings is that we can only be made clean and alive when we lay ourselves bare to His ridiculous offer.

Is there still room in this conflicted world for a sacrament? I will confess that I silently consented that there was not. And then... on night on the porch of Catalyst Resources International, sitting at wooden tables so much like that upper room so many years ago... I was shocked to discover that I was in the presence of the very One who turned the world upside down as a crucified, resurrected Messiah.

I stood and silently wept as I watched the scenes from the Gospels played out by pastors who had never met before, coming from Guatemala, Belize, Honduras, El Salvador, Nicaragua, and the US... coming together and enacting these sacraments.

There is healing here. The debris of life falls away as we collapse into the available grace. There simply is no room for this tired world for anything else.

Again I thought of that night in the room with the thirteen men as One lifted up the cup used for passover and made a claim that put all of creation on notice. God's promise to the world was fulfilled in Him. What was once merely the passing by of death, was now being filled by the One that defeated death, and reconciles us to new life in communion with God.


I had contemplated the events of these past days, making space in my life for the ancient sacraments of a broken world. Again I found myself feeling comfortable on the porch of the mission, the group that had challenged us to foot washing and eucharist were scattered by to their homes across the nations of Central America... and a team from the University of Kentucky again shook my world.

A night of worship was winding down again, when a young man named Logan unexpectedly took the mic. He looked directly at me and said, "Pastor Chad, I'm going to ask a really big favor of you right now." My heart did a flip when I heard him reference the small pool at the top of the property.

He said that he felt led to rededicate his life to the way of following Jesus, and he'd like to make it public by being baptized. Four others stepped forward, some making new life choices and other's declaring that this day was a point of new departure.

I stepped into the pool as my five year old, Sterling, nearly fell in at the opposite end. She was perplexed as to why I was still wearing my socks. But, I had taken off only my outer jacket, emptied my pockets of money and electronics, and stood waist deep in the cold water in the beautiful cool Guatemalan night.

I thought of John in the wilderness, living off the land and walking by faith in God. I thought of Peter who asked Jesus not to just wash his feet, but to wash all of him. I thought of Blind Bartimaeus who said at the side of the road until he heard Jesus walking by.

Surely, this is a time to re-engage in the ancient sacraments of a living God, to proclaim the day of the LORD, to fully take on the love of Christ, to serve others, and to cry out to Jesus, "I want to see."