Sunflowers in the Badlands 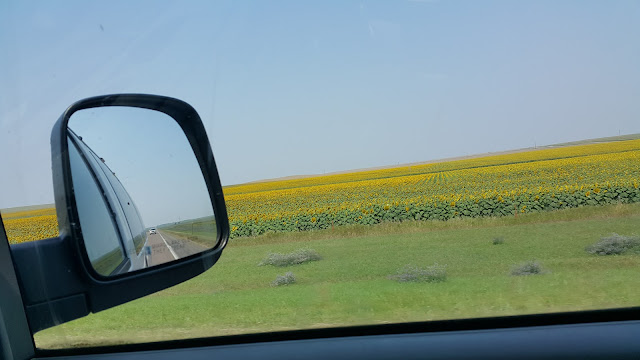 It's good to get back in the saddle again. Ironically, the Connection Point van is a Chevy 3500, the same as I drove in Guatemala, and it feels like an old friend. We left the church on Friday evening at 6PM, right on schedule, and completed the 1100 mile drive in 21 and a half hours.

South Dakota is breath-taking with endless fields of sunflowers that tilt their heads toward the sun as they boldly shout yellow on the edge of the gray and dead badlands. South Dakota is filled with hope and it is filled with death. This is the reality in which our team finds itself this week in a small town called, "Allen."

I suppose we had a bit of foreshadowing when we first crossed into South Dakota much earlier today. A local saw our van and asked where Connection Point was from... and then asked where we were going. When we answered, "Allen," he first asked, "What state is that in?" and then replied that he'd lived in South Dakota all of his life and "never heard of Allen."

With a population of 420, Allen is listed by the US Census as the poorest place in the United States. It is the closest settlement to an area that is considered to be the North American continental pole of inaccessibility. Yes, our team found that it is very difficult to reach. Right here in the heart of the US is a place that reminds me of some of the most difficult places I've seen in Central America.

The landscape is beautiful... as far as our eyes can see... and just as present is a sense of death that pervades the spiritual environment of the populace. Suicide resides here as a known and yet impossible to evict tenant. Of all the families we have met here today... not a single one of them has escaped unscathed. Not one. Suicide has touched them all.

I type tonight in the sanctuary of a small beacon of hope, a little Church of God. The team is sacked out around me as the temperature plummets outside. In the past year this congregation of seventy has buried 38 people.

And yet... I am here to report that God is here. His voice is unmistakable. His fierce hope pierces the darkness. Tonight our team witnessed boldness of Biblical proportion and we saw God's Spirit begin to shape the lives of those who are turning to see Him.

In the shadow of the Badlands, the faces of the sunflowers turn to seek the Sun. Their radiance casts away the darkness.