I’ve never been able to keep a wristwatch in working order for longer than six months. My first was a Timex watch with a glass bevel and a black leather strap from my parents when I was in grade school. It lasted a few months before the strap tore and the glass was scratched.

Since that time I have destroyed every single watch I’ve ever owned. Unlike the history of that first watch, I’m not the type of person that typically breaks things. In fact, of all the watches that have hit the garbage, only two were due to impact or water damage. Most of them simply quit working.

And so, I often find myself in want of a time-piece.

This past December I ordered a throw-back design watch that was popular in the 90s. It was a Shark Clip, digital surfers watch. I found it on Amazon for a little over twenty bucks. It was a kind of ugly blend of black, orange, and green. I’m not sure why, but of all the watches I looked at online, it was the one that I purchased.

The little watch has surprised me by passing the six month mark without malfunction! Ugly or not, it gained my loyalty and I’ve enjoyed wearing it. Perhaps it came to me with a purpose?

Our team arrived Friday night in Belmopan Belize. The very next morning was the first time I met Victor. The first thing he said was, “Hello.” The second thing Victor said was,

“Can I have your watch?”

I laughed at him and told him that he needs to work on his approach before he goes for the hard sell. I thought to myself, “There is absolutely no chance I’m giving him this watch, I’ve finally found one that works.” I figured that he'd soon forget about it and hit up someone else.

But, Victor and I seemed to keep running into each other throughout the day, perhaps he was working on his approach? Soon I saw him leading in the games, helping his friends with activities, and he continued to hang out near me. To my surprise, he didn't ask anyone else for anything.

But, at the end of the first day, he came back and asked me again, “Can I have your watch?” I looked into his eyes full of sincerity, and to my surprise, I could not bring myself to again tell him, “No.” So I decided to deflect him. I’d just give him a non-answer,

Surely by the next morning, he’d forget about it and ask someone else for a trinket. He didn’t need my watch, I did! It was the only watch I had, and I hadn't destroyed it. It was a durable little keeper.

And then I remembered the words of Mother Theresa, about how we are called to give out of our poverty. Of course she was only paraphrasing Jesus (Mk 12:43-44).

Ugh. I felt the sting. I wanted to call out,

"Not fair! Jesus and Mother Theresa are ganging up on me!"

I am on a five week trip with 10 students, I need to keep us on schedule, and I have only a single watch.

Again the next day I stalled Victor with the same phrase, “I’ll think about it.”

His persistence continued. Finally I asked, “What do you have to trade me?” He responded as his face fell, saying, “Nothing.”

Geesh, now I was just a jerk!

While the response saddened me, I didn’t want to let it show, and so I poked him playfully and said with a wink and a grin,

“Well, if you’ve got nothing to trade, I’m going to have to just keep thinking about it.”

He slowly turned and walked away, his face fell with his eyes on the ground and his hands in his pockets. I don’t think I realized it then, but he had me in that moment.

Monday night our crew gathered in the sanctuary of the church building for prayer meeting. While the singing began, I saw Victor walk in the side of the building. Men and women were already at the alters, praying up front as one of the ladies led us in an old hymn, swaying from side to side as she sang a rich alto, the music flowing as she sang with conviction.

I thought of my own childhood, of how when I was Victor’s age, I had big dreams and I looked up to the men of the church. I remembered how cool it was when people from far away came to visit us.

I remembered when I was about Victor's age, my parents took me to hear the Southern Gospel group, the Kingsmen who came to sing at a little country church. Afterwards, at their merchandise table I had my eye on a penlight. I desperately wanted it, but I had no money. When the singer at the table handed it to me and told me that I could have it for free… I was ecstatic. I’ll never forget that.

That memory wrecked me emotionally. I realized the power of it. After nearly 40 years, I'd not forgotten. That little boy was no different than me.

I left my seat and walked around the back of the sanctuary where Victor was then sitting. I removed my watch as I neared him. I knelt beside him and held out the watch.


The smile hit his face like a camera flash!

He reached out to take it and then immediately gave me a full blown bear hug. He was smiling, I was smiling, and we both were thrilled. I started to walk away when I felt him tug my arm. I turned to see him holding out a stuffed animal. He handed me Dory from Finding Nemo!

He had brought me a trade! 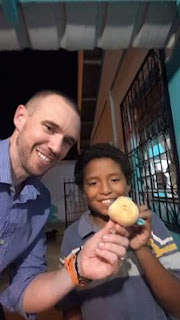 The fish was well worn, a bit dirty, and somehow perfect. I slipped the loop on the Leatherman multi-clip of my backpack and told Victor that the fish would be traveling with me tomorrow to Guatemala and Honduras. In fact, next week it would ride on my pack into El Salvador. He seemed thrilled to know that I’d be traveling with his trade.

While I write this now, I have no doubt that the reason that little watch kept on ticking beyond the odds… was because it had a purpose to find its way to him. I believe that through that watch, Victor knows that he matters. He knows that I saw him. We connected.

We exchanged things of value: a watch, a fish, and the emotional memory of a powerful moment. I’ll be carrying that memory of him over the next few weeks, and maybe he'll remember me when he's a grown man. Maybe someday, he can make a little boy smile.

Maybe Jesus, Mother Theresa, and Gringo-Chad can gang up on him!

Isn’t that just like our God? He has given each of us something of great value, something that we could never procure on our own. He does this because He wants us to know that He sees us, He loves us, He wants a relationship with us, and He wants us to be a part of His story.

Even so, we don’t get it for free. He asks that we give Him what we have.

And so today, I was both the giver and the receiver. I gave away my only watch… I gave from my poverty. Over the next few weeks, I will endlessly look to my wrist for the time… and I will remember the smiling face of Victor each time I reach for my backpack and I see the fish that he gave to me.

I'll smile then with the knowledge that in a little village outside of Belmopan, there is a little boy that is wearing an ugly watch, who knows that a Gringo somewhere in Central America saw him and loved him.

God's story is meant to live in us all. To recognize His love for us, to love Him back, and then to love others.