I first encountered her in August of this year, and her gaze from across the hill stopped my breath. I will never forget the power of her eyes. From their depth my soul felt as if it were being viewed by God. I came home and captured the following memory in my post, Provision of The God:

She held my gaze with a confidence that should have been unnerving. But as I was pulled into the reflection of her deep brown eyes I felt only a sense of peace and knowing. She began to walk towards me, and never took her eyes off my own. Again, and even stronger, I felt myself being pulled through the years to a place that existed only in the past. I felt like I was being observed and noticed by a perspective that saw much more than I could take in.
As she approached, I reached out my hand and took hers. She smiled and I had a friend for life.

I had a single picture of her, and it became the wallpaper on my phone. Countless times I have looked at her picture and realized perspective on my own life. She has unknowingly held my hand over many days, and I have hoped that I could see her again.

I came home to realize that I didn't even know her name. She seemed to appear in my life, searing forever the moment... and then disappeared. If it were not for this picture, I would have wondered if I had imagined the whole encounter. Maybe it was just a vision... the result of a stretched mind, an overwhelmed soul, and a fatigued body.

The wheels of the Suburban stopped turning on the dirt road and the dust arose and filtered our vision. As my boots found purchase on the mountain terrain for the third time in 2 years, my eyes began to search for her. Now more than ever I was convinced that something greater than the mind of a child had looked out to me through those eyes.

I found her. I tried again to take her picture. She smiled at me and would turn her head each time I tried to take a photo... and then my camera froze up. It has yet to recover. 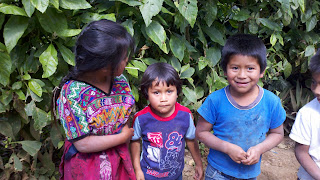 Kids can be cruel. For the past few days I have been a bit angry with the kids of Cerro Alto. While working and playing in Cerro Alto, I learned that her name was Luna. At least, she was called Luna. I was told that Luna was short for her full name, Eveluna. I was thrilled... it was such a beautiful name. Luna is the Greek name for the Moon, and throughout many languages, is still regarded as such. I was thrilled that this beautiful little girl who had captured my heart had such a perfect name.

Luna did not speak. I am unclear as to whether or not she can... I heard conflicting reports. I do know that she could understand, and respond with smiles and nods. And I know that her heart and mine speak the same language. Luna did not run and play with the other children. She often stood on the outskirts, and the world seemed to often pass her by. She wore the same clothes that I saw her in 3 months prior, and she still had no shoes.


So why was I angry with the boys and girls of Cerro? I learned that her name was not Luna, it was not Eveluna.... it was in fact, Evelyn... although we continued to mispronounce her name throughout the week. We theorized that she was called Luna as a taunt because of her condition. We surmissed that Luna was some sort of mean joke that reminded us of Lunatic... and the stigma that can often accompany mental illness.

My heart ached for this girl. This incredible, beautiful girl who had the eyes of God.

My uncle was on this same trip. I had not spoken to him of Luna... and yet he saw her too. Stephen came to me and asked me if I had noticed her. He mentioned that her legs were cracked and dry, and that she was constantly scratching at them. He pointed out that she had marks on her legs left from the digging of her nails.

Stephen approached our team leader, Melissa, and asked if it would be ok to try to help the little girl. It was at this moment that my world again stopped as I observed the heart of God as it poured out from the life of a deep-eyed little girl.

I stood shock-still as my uncle began talking to her and she walked across the dust to him. He looked into her eyes as he spoke softly. She smiled. He lifted her and sat her on a stack of cinder blocks. Melissa then approached and began speaking in soothing tones directly to Luna.

The air was suddenly still. The village was strangely silent.  I turned my head and saw that all the kids had stopped their playing. All eyes were on Luna.

My heart caught in my throat and my eyes began to cry as I saw Melissa take a moist clothe from a package and begin to wipe clean the cracked and filthy legs of this child. Melissa knelt directly in front of her and spoke to her softly as she began to remove the dirt and clean her skin. I heard Melissa ask, "es bueno?"

The smile that spread across the face of Luna was immeasurable as she nodded.

Melissa continued to clean and moisturize the cracked and neglected skin of this child's legs. She spoke to her the entire time, telling her in English that we love her, we hope she likes the wipes, and that she is beautiful. As Melissa cleaned her legs... I could not help but notice her feet.

While her legs were damaged and painful looking... her feet were almost too much to look at. The village owned a couple of cattle that they would raise and sell for income. This small child had no shoes. Life had demanded that she walk barefoot among dirt, refuse, and cow dung. Her feet bore the evidence of all of it.

My mind was hit with the force of a head-on collision with the in-my-face reality of biblical stories. I thought of how the New Testament tells of Christ kneeling to wash the feet of his disciples. I thought of vivid oratories from preachers past of how the feet of the disciples must have been absolutely filthy from treading through the countryside and the city... caked not only with dirt, but with feces and garbage.

My soul broke in half and I had to hide my face as I openly wept. I simply hid behind the wall of stacked block and sobbed. I couldn't even catch my breath. Melissa had Luna's small, broken feet in her hands... and she was washing them clean.

This was true religion. This was the best of humanity... reaching beyond our selfish fears and desires... to reach the need of "one of the least of these."

As I said... time for the village of Cerro Alto had now irrefutably stopped. It wasn't only the children who were watching. This little girl... this child who had been shoved to the outskirts of society... was now raised on a pedestal and was having her feet washed by an American woman. This was a shocking and significant moment. And although it had happened seemingly without notice, at this moment it's significance stopped the world.

A member of our group, Brett voiced it for us all as he said, "this is a real foot-washing moment." Melissa was now re-creating the ultimate example of Christ.

Days later, while on a bus returning from an excursion, we decided to take a moment to tell one another about the most significant moments of the week. A member of our group shared the following story:

I will testify to you... on that day, on that mountain in Cerro Alto... I too saw the face of God staring out through the face of a child. I saw it in August, and I saw it again in November. And I will tell you... seeing the face of God is life-changing.

So tonight, I was still wrestling with the dichotomy of the beauty of the children of Cerro that I encountered, along with the crass treatment of little Luna. It tortured me that they would make fun of her condition... even though I understood that kids are naturally pre-disposed to do so, and I am am probably more guilty that the average guy for poking fun of people. Nontheless... I turned to google.

I did a search on Spanish spoken slang in the central America's and I focused on the word, Luna. And I found this: