The Light that Pierces the Darkness 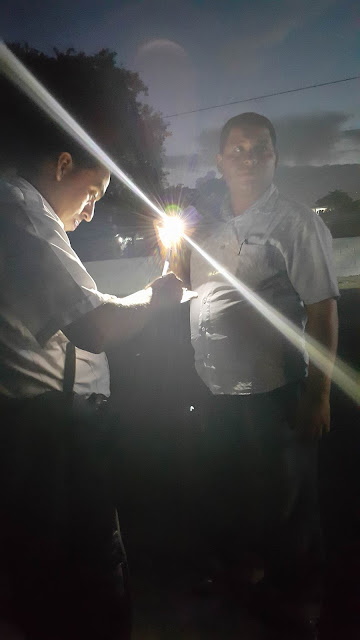 Every picture has a story, but some are better than others. The Polar Bear, the official 15 passenger van of Emmaus, was cooling its V-8 engine in the concrete and concertina wire lot and the crew had unloaded the bags from the roof-top carrier with skill gained by the past four weeks of practice. The air was cool with the promise of a coming storm.

Pastor Ayala shoved his mobile phone into his pocket and spoke quietly to Antony who relayed the rapid Spanish phrase to me in English, "Pastor Isaias has had an accident and they want you to go to the scene of the crash."

The advice from the American Embassy regarding an automobile accident in Central America is to remove yourself from the scene as soon as possible so that you aren't caught up in an emotional exchange of retribution or misplaced blame. I knew that the practical thing was for me to say, "No."

But I am a Pastor. The world needs those who can run towards the hurting rather than those who run away. I ran into the church to grab my Passport and then joined Antony and Pastor Ayala in his car.

We approached the scene. Pastor Isaias was driving his motorcycle with another young man who is a member of the church riding on the back. The front of their motorcycle struck a man as he stepped into the street, drunk. The force bent the front forks of the motorcycle and shattered the headlight.

Stretchers were already being lifted into an awaiting ambulance. Pastor Isaias friend was dripping blood from a busted leg and the intoxicated man was unconscious. We learned that the police were taking Pastor Isaias into custody. He would spend the night in jail.

As the police began to complete their reports, I stood silently at the scene of the accident, praying that they would release him. Pastor Ayala seemed calm, but sure that Isaias was going to jail. Even so, as I prayed, Pastor Ayala began to speak with the police.

During that conversation, the police officers decided to release Isaias and the also agreed not to confiscate his motorcycle, even though the documents were not in order.

I slipped my phone out of my pocket and took a single photograph blindly, just touching my thumb to the shutter icon. The result was this photo that captures the police officer as he completed the paperwork to release Isaias as Isaias held his cell phone for light.

I watched the officer masterfully sketch the accident scene on a grid with a worn pencil and a white gum eraser. The clipboard was worn thin and the officer's posture pointed to a more innocent time in his life as he drew with his tongue slightly protruding from his lips.

I wondered if he dreamed of being a police officer when he was young? I wondered if Isaias had always wanted to be a pastor?

The wind began to pick up as the night grew darker and quiet. Somehow in this chaotic night, a few disjointed souls gathered to find a peaceful solution as a beam of light shone to remind us all that we are more than the situations that surround us.

In the threat of the night, we are called to pierce the darkness. I am thankful tonight that we answered the call. There is still a hope for this sad world.