Lifting Up the Serpent From Across the Abyss 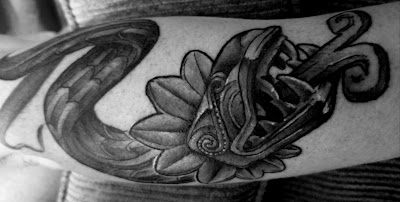 The text came through today at 5:32 PM. We lost another one. The four of us are each going about our lives today in separate places, but in this moment we mourn together. It is more than a death, it is a loss and a blow dealt by our enemy. Make no mistake, we know that we stare across a dark, bottomless chasm with lives that hang in the balance.

Our team of four is nothing more than ordinary people who have come together to face the cold stare of an ancient adversary who stares us down from across the expanse. A police officer, a social worker, an advocate, and a chaplain... we hold up a bronze serpent of hope to one of our nation's most desperate populations.

Addiction is nothing less than deep fanged puncture of the bite of Satan. Like the story of the Garden, he still whispers in ears to ensnare. Promises made and death delivered, after that first injection or snort... innocence is lost and the poison seizes a mind hostage with the violence of a terrorist at the helm of a 747.

It can feel hopeless to a human soul that is gripped by its hold. Society fears them, they damage the ones they love, and the abyss draws them forever down.

He stares at me from across that dark chasm and he sneers. He seems to say, "Where is your Jesus now?"

Death feels like the hot slice of a paper cut. So quick, so sudden, so shocking. It is such a violation. It's foreign. I wasn't created to experience this rape.

I was created to walk with God in the cool of the garden. So were each and every one of those lost lives. God made them. God made me. There is value in every single life. Jesus, where are you now? You are evidenced in every intake of breath and every beating heart. You are even here with me, holding me as I stare boldly into the eyes of my enemy.


"And as Moses lifted up the serpent in the wilderness, so must the Son of Man be
lifted up, that whoever believes in Him
may have eternal life."
The Gospel according to John, Chapter 3, verses 14-15

Yesterday I found myself in the chair of Katie Hutchins at Wells and Co. Tattoo. Katie has been my artist for over a decade and she was laying down the ink on my ninth tattoo. It is a serpent.

My time in Guatemala certainly influenced the design. It reminds me of my good friend, Antony, who was born under that Mayan symbol. It reminds me of the strong faith in Jesus that we found in the stories of so many lives we encountered there. And the serpent reminds me that we have hope in the most unlikely of places.

Conversations of hope shatter the silence of a jail. I now tell the story of Jesus through the ink on my arm. How do you give hope to the hopeless? Listen to their story and share your own.

Why do I have a tattoo of a snake on my arm? There once was a people who were enslaved by an evil king. They escaped, only to find themselves dying in the wilderness. They believed they had no way out, and they cursed God and thought that they'd be better off dead.

But their leader talked to God. He raised a bronze serpent up on a staff and when the people looked at that serpent, they found healing and hope even though they were dying.

There was once a man who was both human and God. He knew this story from his childhood. His name was Jesus. He said that when people are hurting, without hope, and dying, they can look up to him just like those slaves looked up to the bronze serpent, and if they believe in him, they may have eternal life.

It is time to look up. It is time to believe. I look across the chasm at my adversary and I stare deep into his eyes. I feel the pain of his destruction, but I have a greater awareness of the one who continues to offer life and rescue from the pit.

And so I roll up my sleeves and I lift up the serpent. 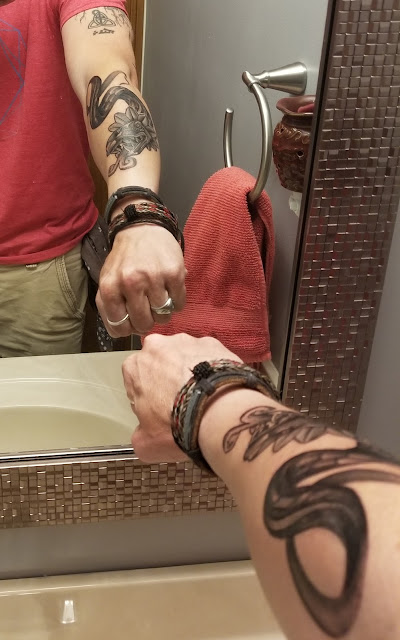 Email ThisBlogThis!Share to TwitterShare to FacebookShare to Pinterest
Labels: Recovery